This campaign is for a Portuguese comics album. The English version of the comic is available for free at www.chroniclesoftimeandspace.com. If you want to help Portuguese creato...

This campaign is for a Portuguese comics album. The English version of the comic is available for free at www.chroniclesoftimeandspace.com. If you want to help Portuguese creators please endorse this campaign. 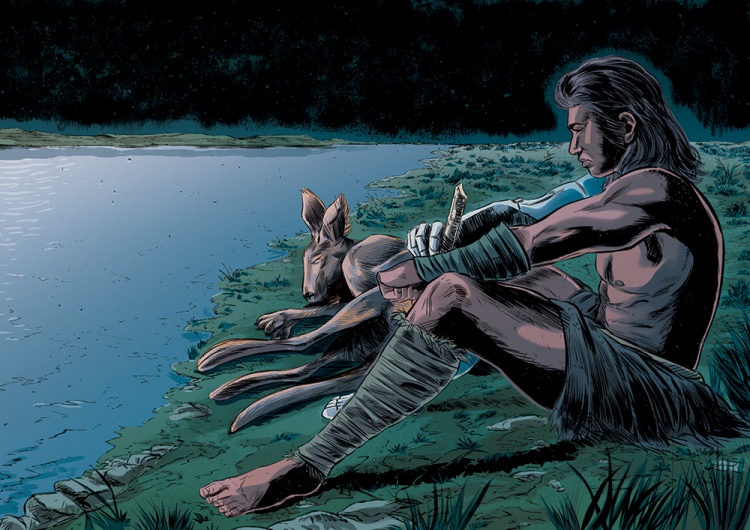 “Chronicles of Time and Space – Uluru” is a 158-page graphic novel imagined and written by Marco Fraga da Silva, illustrated by Matthieu Pereira and colored by Sofia Pereira. This comic book is self-conclusive (but it opens the door to other narratives that will be produced in the future) and tells the story of the young Uluru who embarks on a journey across the island-continent of Australia, trying to emancipate himself from the control of cybernetic entities. who educated him and who care for him. This is the story of how Uluru deals with and grieves the death of two people who were dear to him.

The color album is a sci-fi narrative with an emphasis on stakeholder relationships and less on the gadgets and advanced technology of the period portrayed – a time well after a catastrophic event that appears to have eradicated all humans from planet Earth, which led to the triggering of an emergency protocol called Ixchel; the protocol is made up of a set of chests that appear in various places on the planet whose mission is to reintroduce the human species into the world's ecosystem. 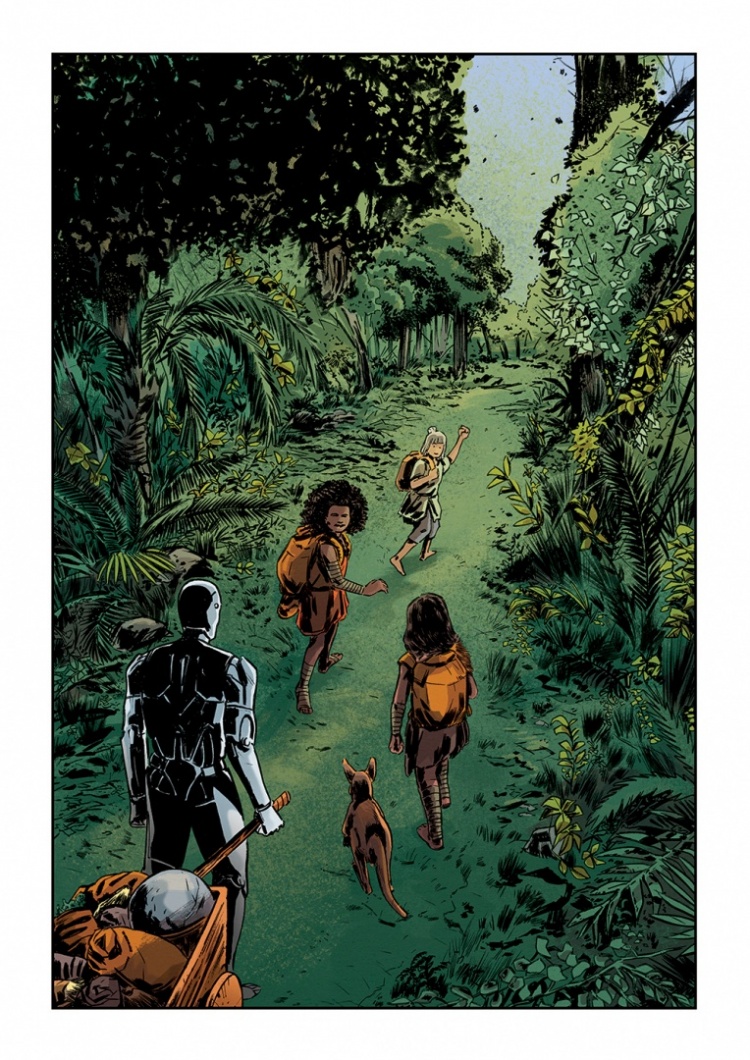 Chronicles of Time and Space is a narrative universe that is being developed in a theoretical-practical doctoral thesis in Media Art by Marco Fraga Silva, under the supervision of Manuel José Damásio and Célia Quico. The thesis aims to create a speculative fiction transmedia franchise and to develop a model for the creation of transmedia franchises in Portugal according to the characteristics of the national market. “Uluru” is the first major story to be developed, but other narratives are part of the narrative universe and will be produced in the coming years: “Leviatã”, “Cabeça de Dragão”, Vidalia”, “Limpatudo Lda.”, etc. 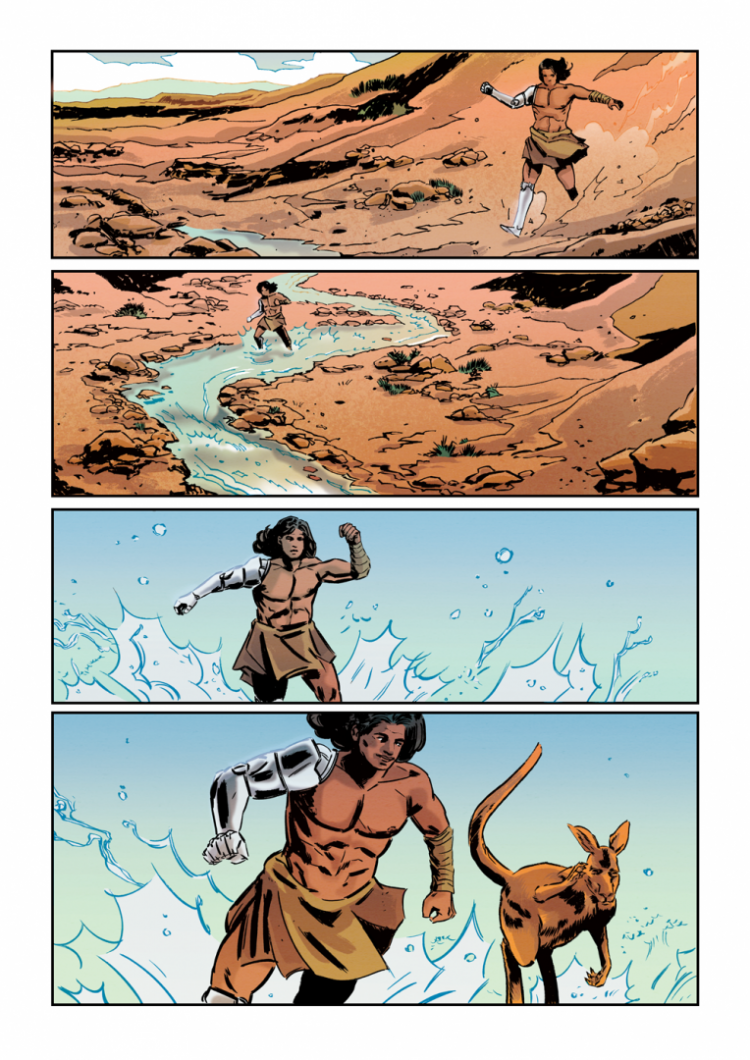 or the Heralds of the 9th Art pdcast: 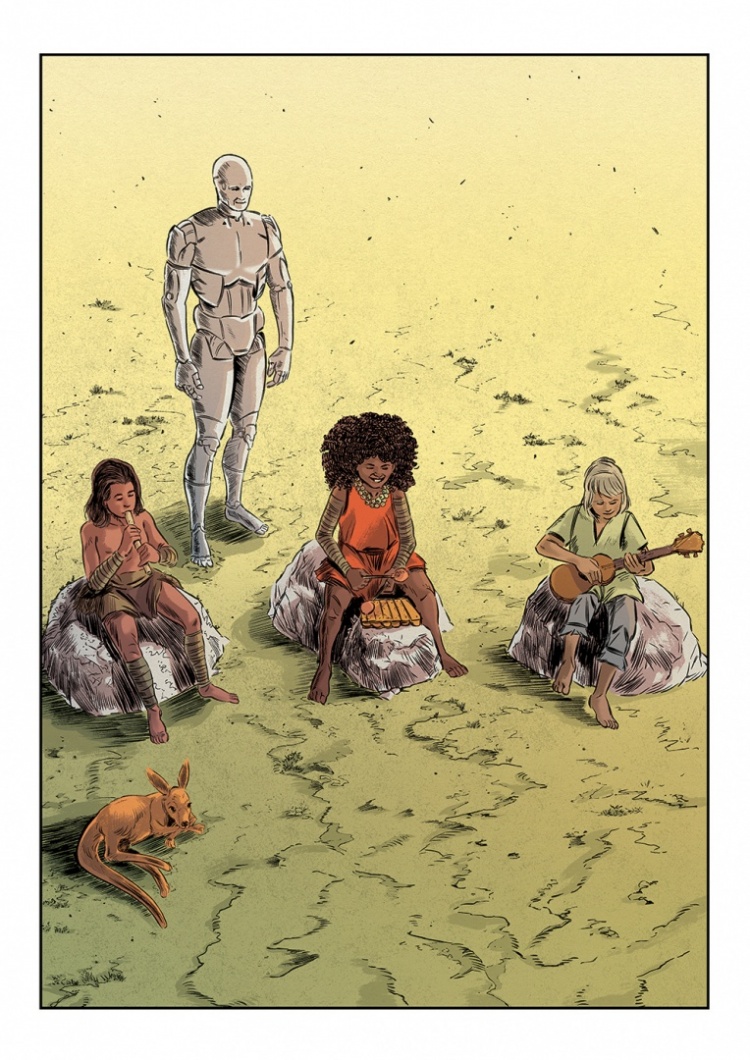 Associação Tentáculo, founded in 2010, is a cultural association with an area of ​​action in three main artistic areas: comics, illustration and literature.

It currently encompasses four main projects that have proven themselves in the national and international panorama at a professional and academic level, namely the Avenida Marginal project, the H-alt project, the magazine Zona and the publisher/events promoter Imaginauta.

To access the digital version of the “Uluru” comic, in 4 languages, visit the official website where you can read the story for free: 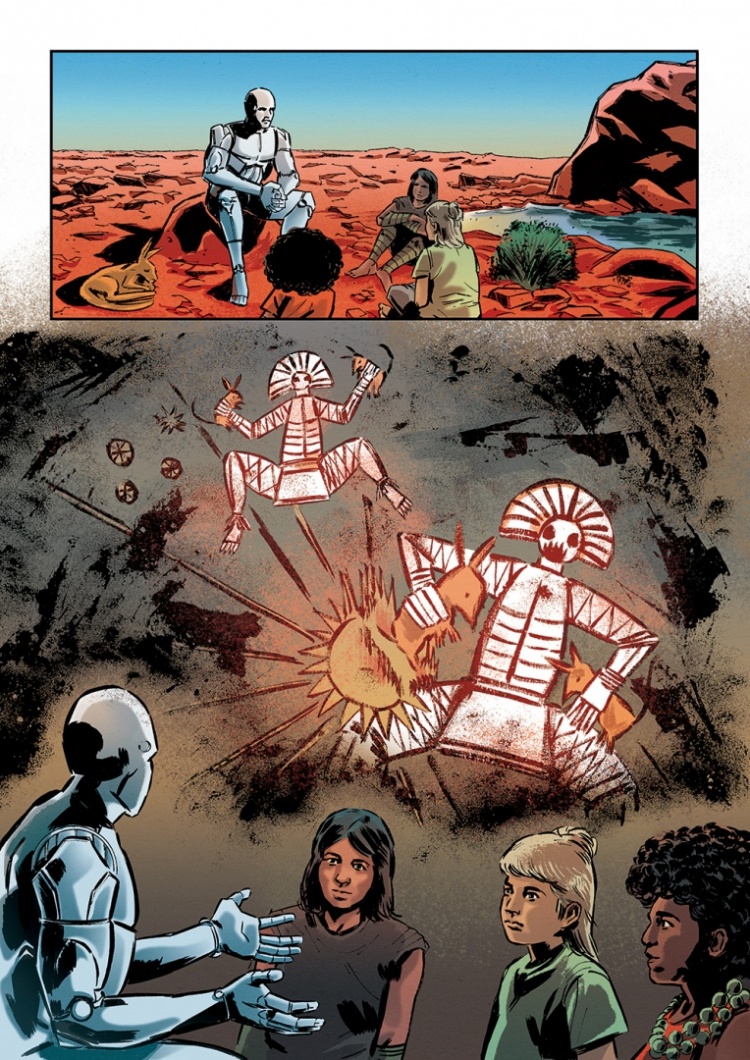 The team that produced the digital versions is composed of 4 elements:

Marco Fraga da Silva (writer), born in the island of Faial, studied graphic design and cinema. When he taught at IPBeja, he developed a taste for sequential art and created an international cartoon competition for Portuguese-speaking countries. He is currently a PhD student and is developing a thesis on comics, worldbuilding and transmedia storytelling.

Matthieu Pereira (illustrator), Portuguese born in France, is a comic book illustrator who wants to tell stories through drawing. He passed through various branches of artistic expression in Paris, from cinema, graphic design, illustration and, finally, comics. After finishing his studies, he came to Portugal, where he has been developing his art. He participated in several national contests and fanzines.

Sofia Pereira (colorist) was born in Lisbon and is a graphic designer and illustrator, sketch enthusiast and storyteller. He studied Communication Design, but has spent most of his time designing since then. He participated in national publications and fanzines, produced short comic strips and self-published three illustration books.

​Flávio Silva (translator) has a master's degree in Modern Chinese Literature from the University of Nanjing and is currently developing a career in the field of translation and interpretation, having already translated (or co-translated) works by Huang Fan (Mandarin-Portuguese), Jonathan Lamy (French-Mandarin) and Susana Cor de Rosa (Portuguese-Mandarin). In addition, he has won several literary prizes, including the 1st prize of the VII National Literary Competition of Cabeceiras de Basto and the 3rd prize of the VIII National Literary Competition of Trofa. Both his books – “A Besta” (2012) and “O Ciclone e a Ilha” (2016) – won the first prize of the Labjovem Contest.

The objective of this campaign is to publish in Portugal, through Associação Tentáculo, a printed version of this comic book, in Portuguese, so that readers and collectors of national comics can read and enjoy and even offer it to friends and family. 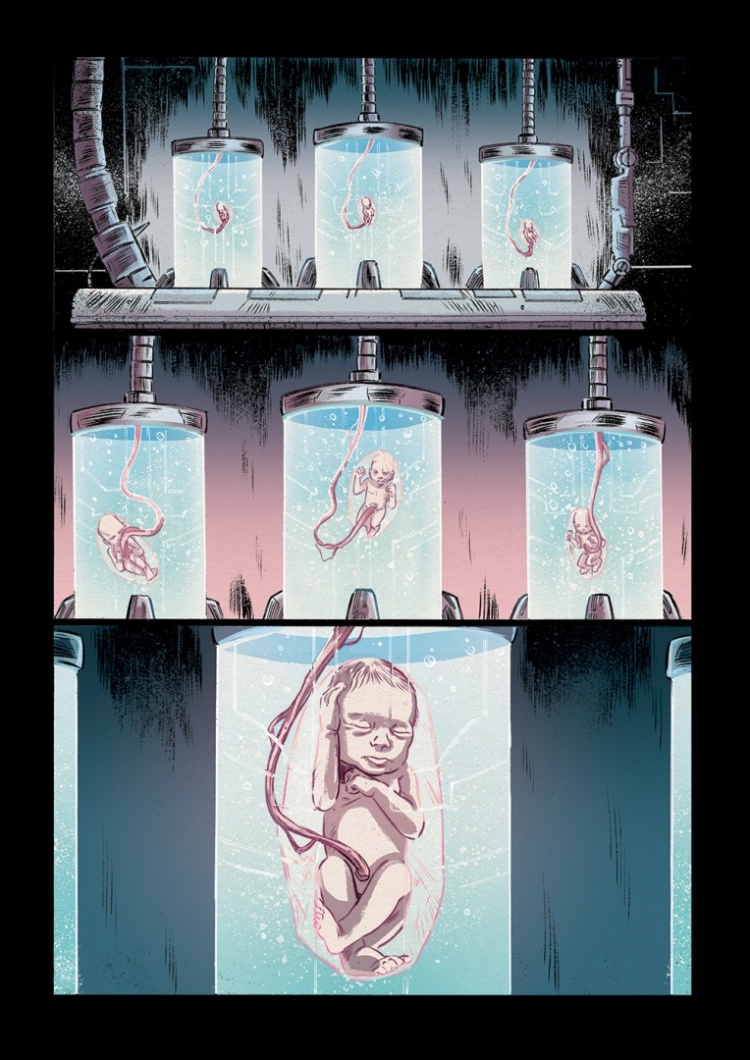 The money collected from this campaign will finance the costs of the campaign, printing the book and shipping the volumes in September 2022. 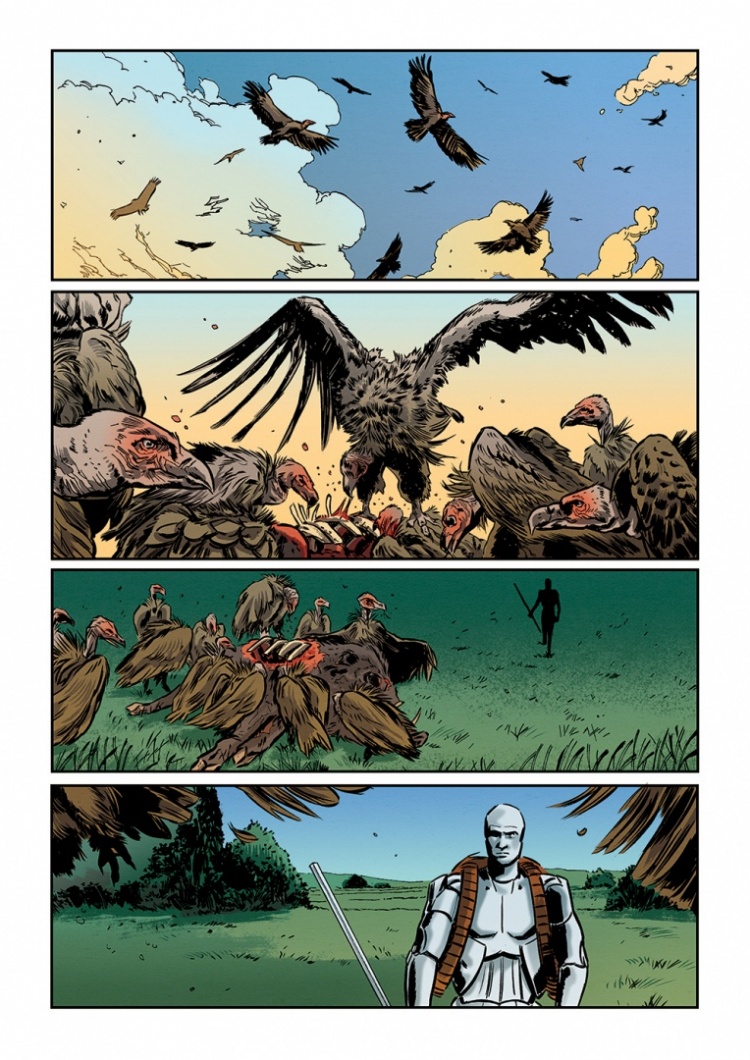 Shipping the books in Portugal is covered by the campaign. Sending books outside of Portugal is possible, but the shipping cost will be added to the value of the reward purchased.

All the extra funding will be used to increase the print run which will benefit the funding of the second volume of the story about the character Uluru. Yes, although the volume that is now available in this campaign is a self-conclusive story, the epilogue closes open as the story continues.

In addition to the book itself, various rewards are available, including original pages. In this section we show the pages that can be purchased during this crowdfunding campaign. Note: a double-splash page counts as 2 pages. The first to select this reward has priority in choosing. Use the image available here divided into 3 strips to indicate the page you want.