We intend to raise this money to help pay the costs of construction and communication of our next play.

We intend to raise this money to help pay the costs of construction and communication of our next play.

We intend to raise this money to help pay the costs of construction and communication of our next play: Bzura

There was a war that lasted 100 years. Peace never lasted that long.

Text and directed by Ricardo Alves

God does not play dice. Playing playing strategy games, but in fact already have who play for him.

And strategy games are two-stroke. Every time a player plays and in each move, a player has the time to move the troops and the time of firing. And then there's the time to get the soldiers removed into storage of toys. But this isn't even a game time. It's just a time of inconsequence. So the strategy games in model 1:18 are a slow play. Think, ponder the options and then decide. There's still time to change parts, roll the dice and define – querying tables – the result of the shooting.

And then wait for the opponent to make your move. No time soon. And the time spent chatting is earned in the exchange of ideas. And when they join lovers of strategy games the conversation might be weird but what is certain is that within each of us there is a strange screaming for freedom. 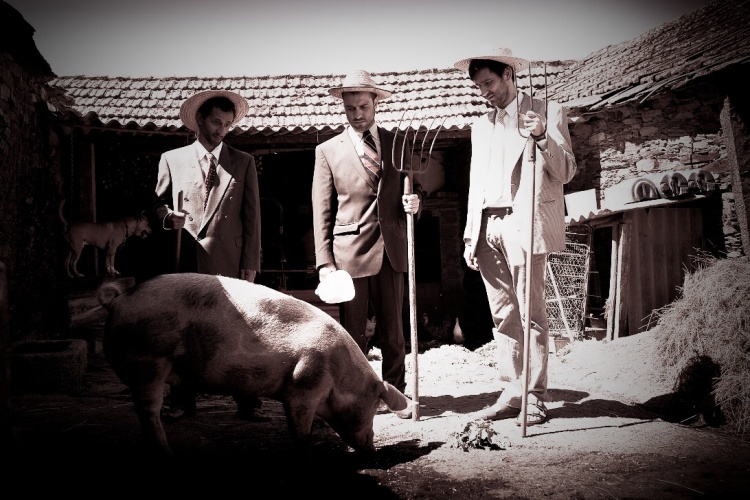 The theatre of Toothed Insole is a group of the city of Porto. The city of Porto is a Portuguese city located on the North Bank of the Douro River, a river which rises in Spain which is the country that appears on the right side of our on most maps. The map is a precious helper when you travel part. The maps are two-dimensional representations of three-dimensional realities. The reason being is because they are two-dimensional printed on paper, an organic substance that was invented in China, a country very far, very large and with a lot of people. People who live in china are the Chinese, unless they are women, in this case Chinese. The Chinese also invented paper Chinese restaurants and also the powder, which in the past was used in the opening of tunnels. A tunnel is a piece of nothing, usually buried in the soil or traversing mountains. An example of a tunnel is what has been done for the metro of the city of Porto. The Port City is a city that has a theatre group. This theatre group called theatre of Toothed Insole.

Construction, dissemination and communication. These are the three requirements for the start-up of our theatre project. The opportunity you are given is to support us in the purchase of materials for scenography and props, costumes and also for the creation, printing and distribution of promotional material (posters, Flyers, MUPI sized outdoor screen, etc.). 1,500€ for scenic stuff 500€ for costumes 800€ for print materials for dissemination 200€ for distribution and posting of this The Bzura will debut the 2 October in Leiria and Oporto season from October 15.

225 members of the PPL community
support this campaign