Bicycle Solidarity Campaign with the objective of raising donations for the acquisition of foodstuffs, which will be donated to the Parish Council for social support in the vici...

Bicycle Solidarity Campaign with the objective of raising donations for the acquisition of foodstuffs, which will be donated to the Parish Council for social support in the vicinity, in Arroios, in the city of Lisbon.

The Portuguese Federation of Cyclotourism and Bicycle Users (FPCUB) launches the Bicycle Solidarity Campaign with the objective of raising donations for the acquisition of foodstuffs, which will be donated to the Parish Council for social support in the vicinity, in Arroios, in the city of Lisbon. In the impossibility of taking a solidarity bike tour, we cannot help but join in our solidarity and thus appeal to this support that will allow us to help those who need it most in this difficult phase.
The campaign runs until 12 noon on April 16.
Non-perishable food items will be purchased, for example: rice, spaghetti, pasta, tuna, sausages, cereals, water or juices.
Give your contribution and help us support this cause. 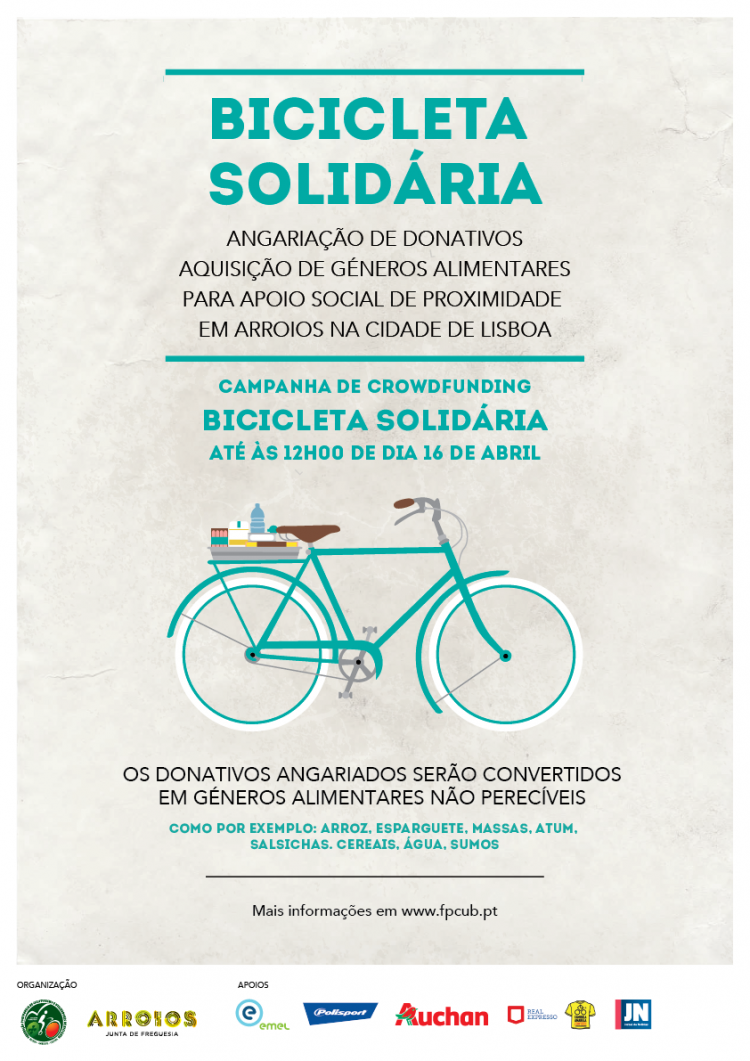 The Portuguese Federation of Cyclotourism and Bicycle Users aims to defend the environment, defend and disseminate the Cultural, Built and Archaeological Heritage through the promotion of the bicycle as a form of sustainable mobility and the development of ecotourism and leisure cycling practice and tourism.

FPCUB was founded in September 1987 , it is a legal person of public benefit, being composed of 1200 associations representing a total of about 36,000 people .

It is a national non-governmental environment organization . He is a member of the ECF (European Cyclists' Federation), where he collaborates in actions to defend the bicycle as a form of sustainable mobility; AIT (International Tourism Alliance); the FIA (International Automobile Federation); and has a protocol with CONBICI (Iberian Bicycle Defense Coordinator). He has collaborated with UNESCO on the bicycle. He is a founding member and currently holds the presidency of the Executive Council of the Portuguese Confederation of Environmental Defense Associations ( CPADA ). He is a founding and executive member of the Portuguese Confederation of Tobacco Prevention ( COPPT ) and of the European Union of Cyclotourism (UECT).

He defends the bicycle following the recommendations of the WHO (World Health Organization) and studies that demonstrate that health is the key factor that leads people to choose to use the bicycle, either for leisure or as a form of daily mobility, on the one hand, and that the use of bicycles has a high potential to improve public health, on the other hand, at different levels - coronary heart disease, cholesterol, diabetes, obesity and smoking, among others.

In 2006 he created the National Bicycle Mobility Award as a public recognition of the contribution of certain entities that have promoted the use of the bicycle.

He has organized several outings of solidarity, among which, since 2012, the Festival of the Solidarity Bike in Lisbon and Porto.

Since 1987, it has been developing campaigns in the areas of Health , combating Drugs, AIDS and Anti-smoking Prevention. Through the Bicycle, it has been recovering members previously dependent on alcohol, drugs or tobacco. Encourages the use of bicycles in health promotion actions with schools and parish councils. He has defended the quality of indoor air and smoke-free enclosed spaces and, in this context, has addressed this issue in several forums for discussing environmental quality. It has celebrated the World No Tobacco Day (31 May) and the Day of the Non-Smoker (17 November) annually and other actions to raise public awareness of the prevention of smoking have been organized.

It is intended to contribute with modest support but all donations will be welcome and converted, in full, into non-perishable foodstuffs for the social support of proximity in the parish of Arroios in Lisbon.
It is intended to raise 1,000 € until 12:00 on the 16th.