2022 finds us caught between the disillusionment of the past and the dismay of the future. Umbra faces one nightmare at a time, and gives us the velocity to escape. Join the pri...

2022 finds us caught between the disillusionment of the past and the dismay of the future. Umbra faces one nightmare at a time, and gives us the velocity to escape. Join the printed light! 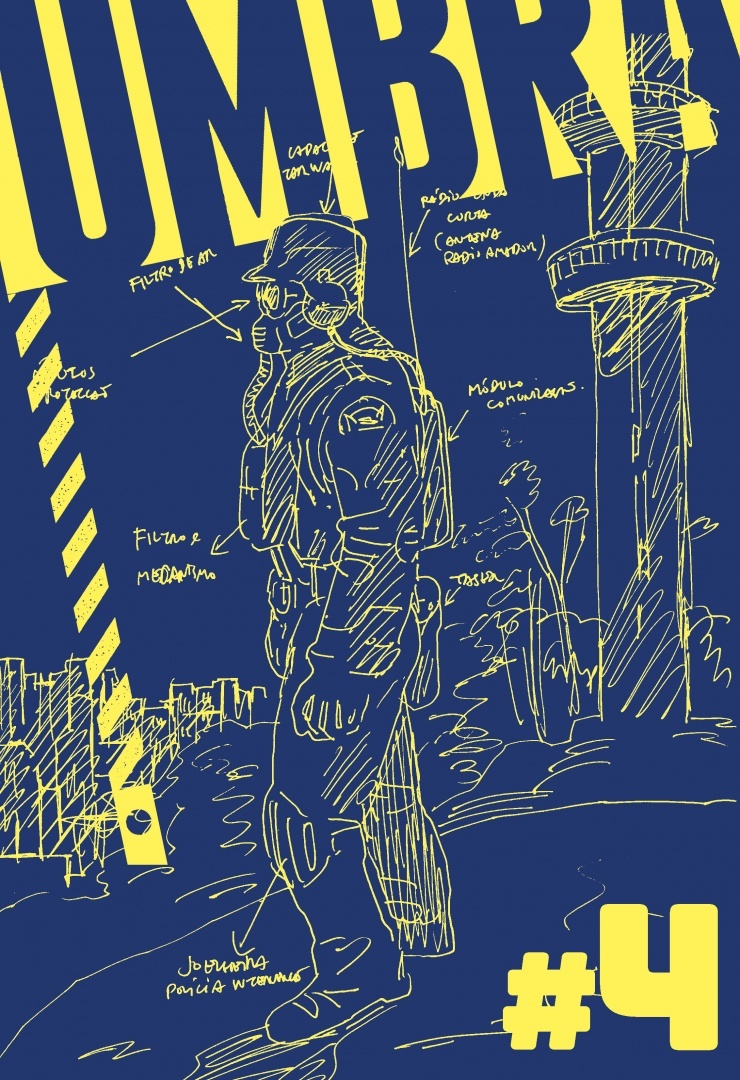 The Umbra stretches, powered by dark energy. Conquered territories become denser, borders are diluted, dangers spread and contaminate. The signs of war and untidy time reign supreme in this number.

We invited André Oliveira, author of a whole series of books, versed in exploring the most diverse complex nuances of emotions and human relationships (with Hawk , Tormenta , Living Will , Lugar Maldito , and other titles). The art is Rita Alfaiate's, the author of acclaimed solo diptych No Caderno da Tangerina e Tangerina (Escorpião Azul, 2017 and 2019, now gathered in one volume), with her dynamic, fresh and deceptively classic art.

Canadian artist Simon Roy, author of the anthology Jan's Atomic Heart and Other Stories (Image Comics, 2014) and co-author of Prophet , with Brandon Graham et al. (Image Comics, 2012-2017), returns on these pages presenting a brief memory of a distant war, many years ago... in the future.

American James Romberger, author of the important 7 Miles a Second (Vertigo, 1996, republished by Fantagraphics, 2013), based on the autobiography and writing of artist David Wojnarowicz, and with Marguerite Van Cook, and the most recent Post York (Dark Horse/Berger Books, 2021) also presents us with a futuristic war narrative.

Frenchman Réza Benhadj, whose “Panzer Tripod” series has been published in David Lloyd's famous online magazine Aces Weekly , has worked professionally in a wide range of design and illustration fronts.

A dystopia by Filipe Abranches, who feeds his latest passions and nostalgic obsessions, in line with the entire Umbra project, and another short by Pedro Moura, here to explore, in the most terrifying way to date in his work, one of his most personal nightmares. The art here is provided by the young Marco Gomes, author of the fanzines Cerveja Depressão (Chili Com Carne, 2022) and Lethal Dose (his own label Void Books, 2022). 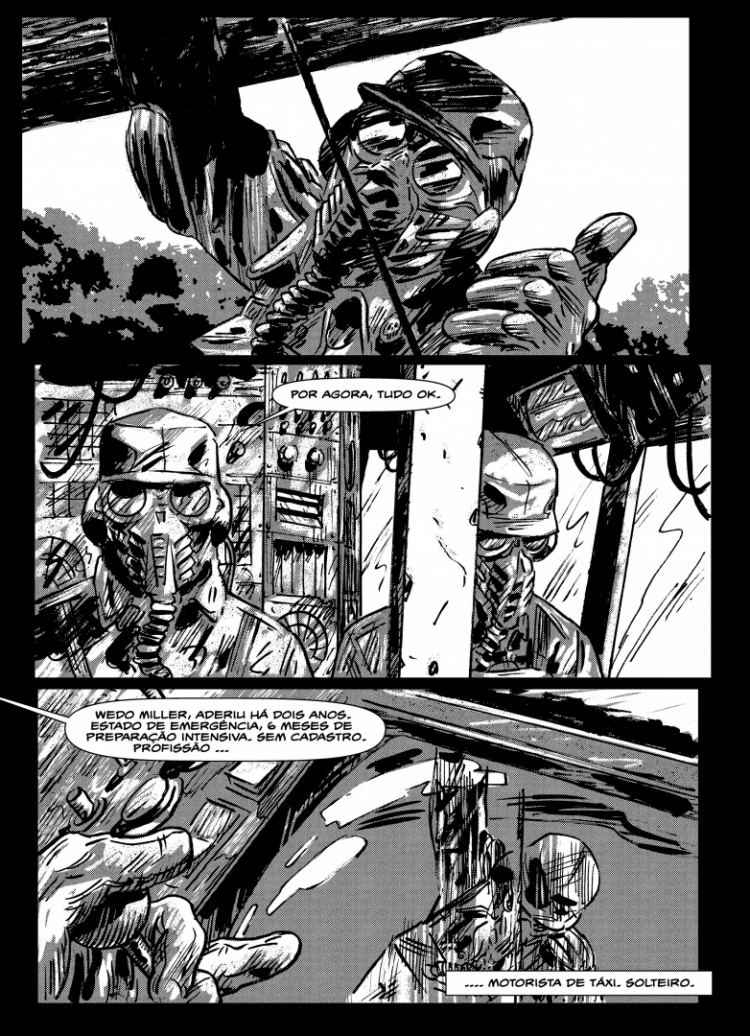 In an alternative historiography narrative, an element of the security forces is lost in the conspiratorial plots that are weaved close to an immense and mysterious Tower, erected in Lisbon in the 80s, buffeted by a pandemic and climatic cataclysms. Under the Tower's watch, the suspense... 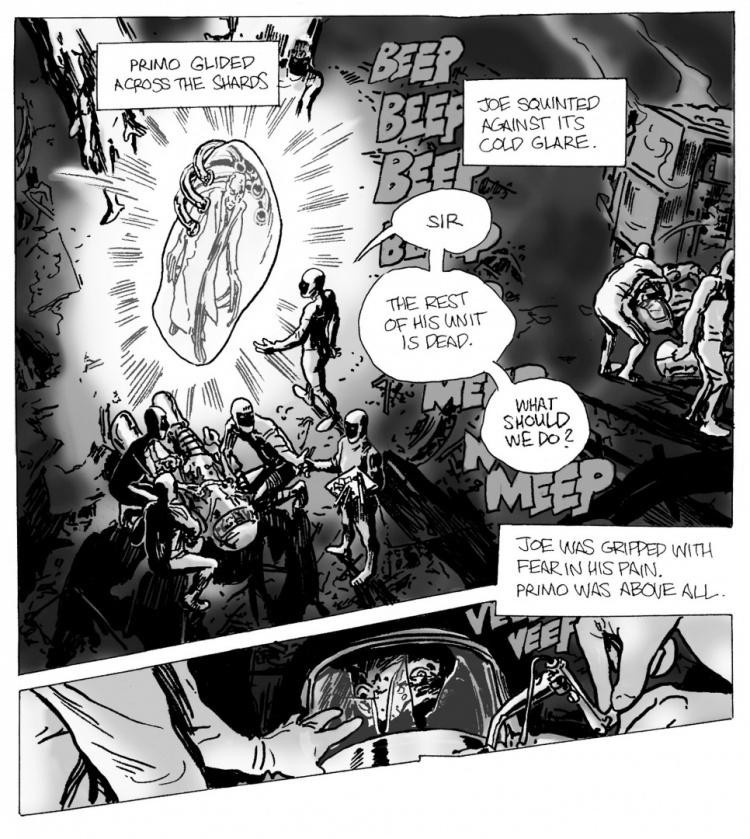 For Hobbes, the pre-social state of humanity was that of bellum omnium contra omnes , “the war of all against all”. Does technology save or close the loop? Joe knows the answer, the other Joe doesn't. Maybe it's not convenient to look at the enemy too closely, lest we be frightened by the reflection. 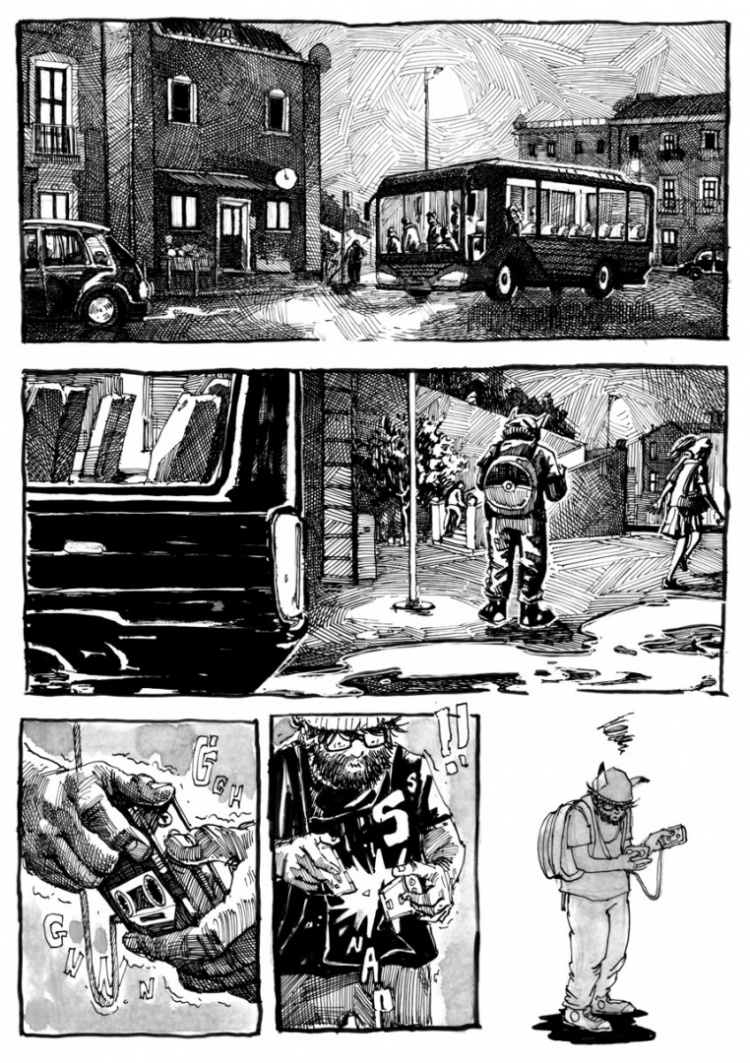 Beware of evading life's responsibilities, and not looking both ways when crossing the road, for the danger that awaits us may be the danger we incite. 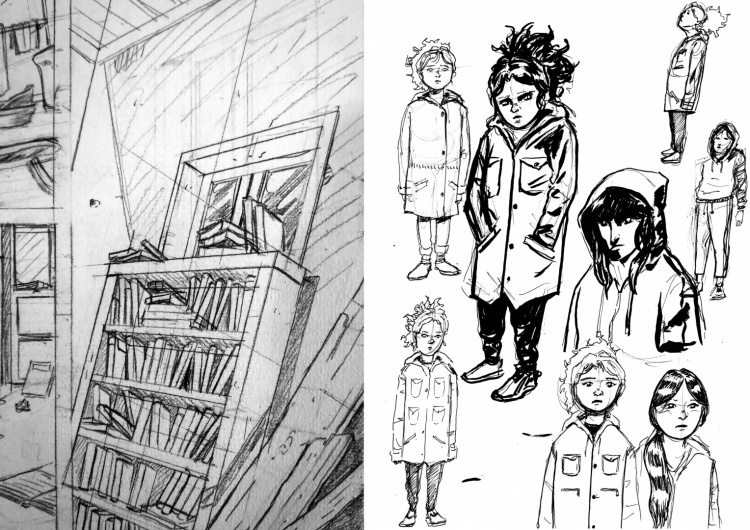 Pedro Moura and Marco Gomes, “The embers and the firewood”

War is a storm that bites everything around. A house is a small boat that navigates the turbulent waters, and in danger protects an isolated family. What can a parent do when monsters approach? 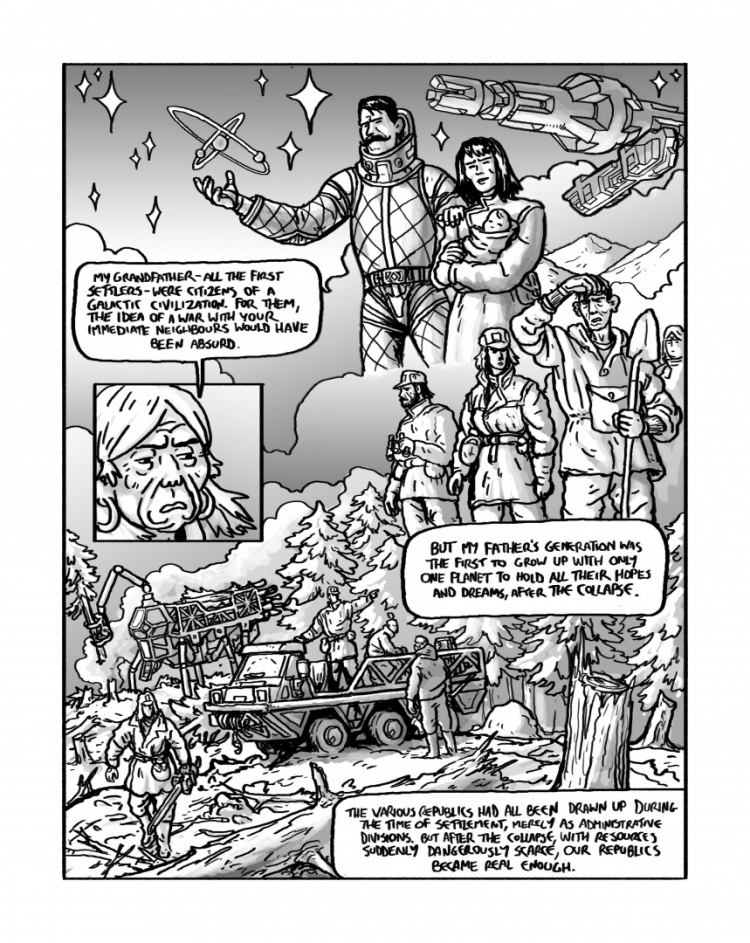 Simon Roy, “ The Pride of the Central Republic ”

Decades have passed since the battles of Altamira, but a young investigator wants to discover the last traces of the amplifier pilots. A walk through the mountains can unravel memories, wreckage and even rivalries. Does time heal wounds? 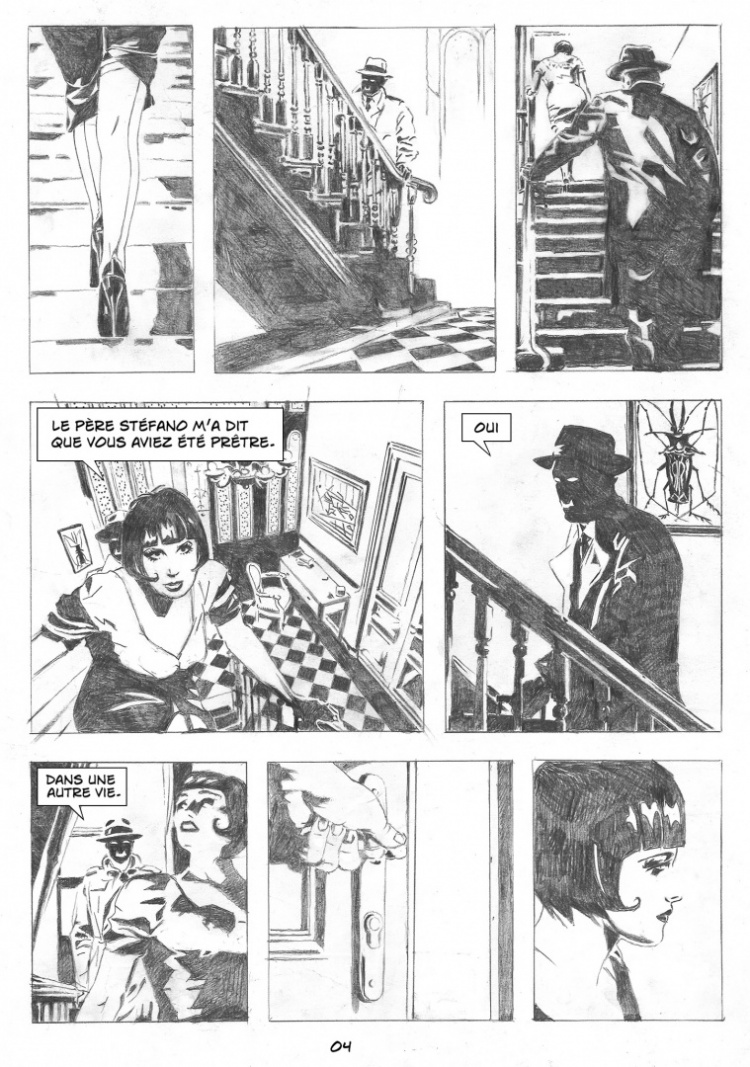 Let us imagine a world in which a screenplay by William Peter Blatty would end up being directed by Jean-Pierre Melville and we are close to the key to this story of a very particular detective whose cases are not solved with the point of a revolver, but with rituals and free associations. But all the ingredients constitute a dramatic puzzle. 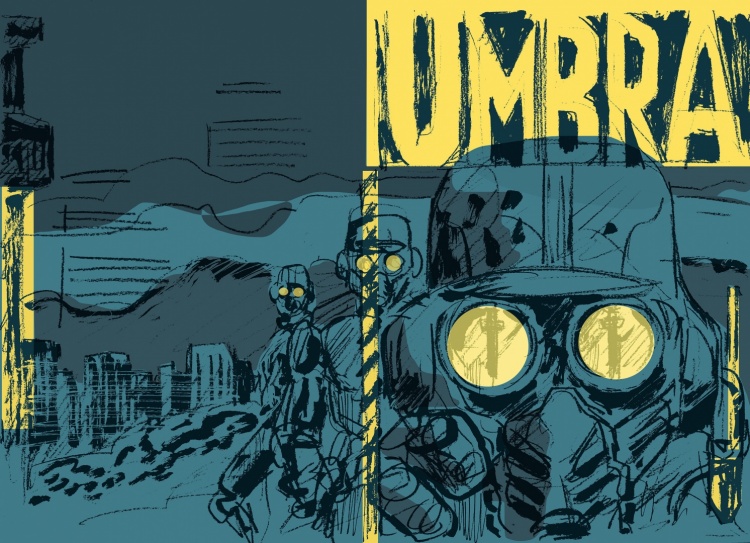 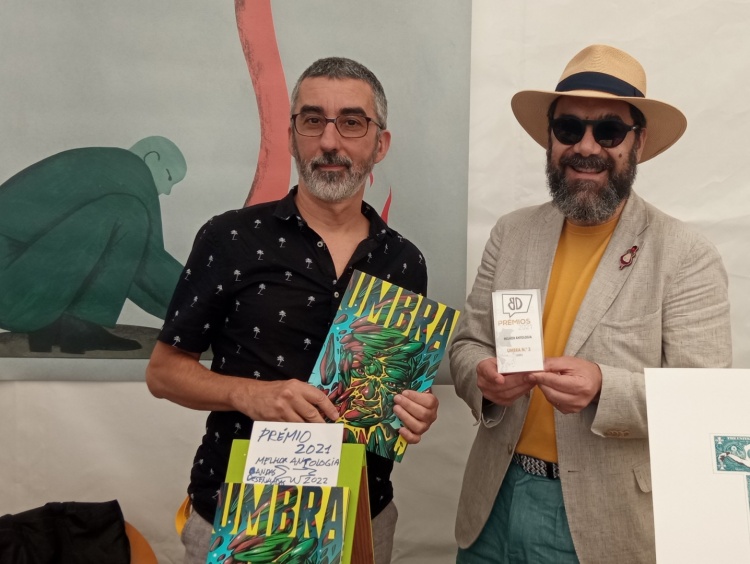 Filipe Abranches (Lisbon, 1965). Degree in Directing by the Cinema course at the Escola Superior de Teatro e Cinema (ESTC). He was a professor in the Illustration/Comics department at Ar.Co. He was a teacher at ESAP/Guimarães (Escola Superior Artística do Porto – Pólo de Guimarães) between 2006 and 2008, where he was the coordinator of the first Masters in Illustration in the country. He started his comics activity at LX Comics in the early 90s. He was an illustrator for the weekly newspaper Expresso and published illustrations in several newspapers: Público , Le Monde (France), O Independente and Jornal I . Of particular note are the following published comic book albums: História de Lisboa, O Diário de K. and Solo . Between 2006 and 2018 he was an animation director.

Since 2019, he has been the editor of the UMBRA project, with three edited collective anthologies and a graphic novel: SELVA!!!/Jungle!!!, authored by him. He divides his work between coordinating the publishing house with Pedro Moura, while at the same time producing comic books. 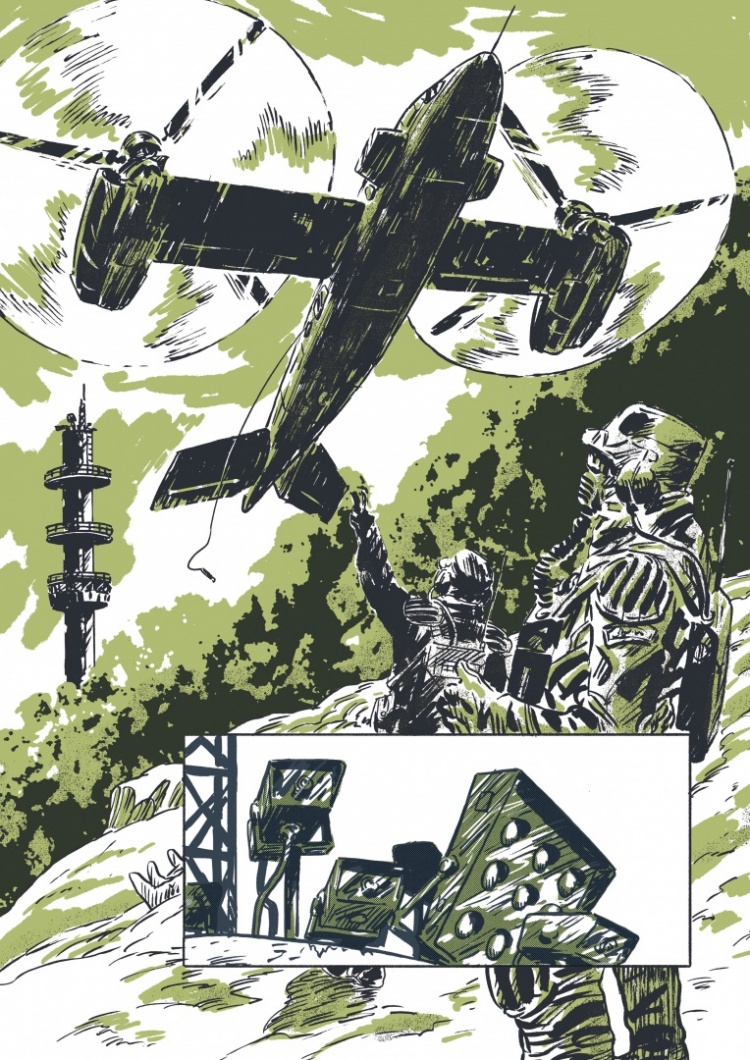 The monetary objective of the 4th issue of Umbra is the value of €2800 for its production. This will allow us to print 600 copies, as in previous editions.

The anthology will maintain the characteristics of the previous numbers: it will measure 270 mm x 190 mm (height x width), it will be printed in black and white on 120 g IOR paper, color cover on 260 g cardboard and 80 mm covers, laminated; and notebooks sewn and glued to the spine with a French crease. The same 112 pages packed with intensity.

As far as rewards are concerned, we will have something similar to what we did for the UMBRA #3 PPL: we will offer prints signed by the artists and originals by national authors to choose from in a predefined number. We still include UMBRA books in some levels. Still don't have the other numbers of the Anthology? Here's the opportunity. In the event that the offer materials are limited to the available stock, we will point out this difference. We will always try to satisfy the members through our communication channels.

All shipments are free to mainland Portugal. Shipments to other locations will be calculated on a case-by-case basis. Always contact us at umbralivros@gmail.com .

Our pre-sales experience is already proven and we ensure timely deliveries with maximum content security.

The campaign limit is the end of August. UMBRA will arrive at the beginning of autumn. There is no set date for the release, but our wish is that it happens later this year, as part of a festival or comic book event. That is, between October and December.

We will do our best to ensure that all subscribers receive their copies before the release.

The edition calendar will be as follows: during the months of July and August, we will continue the dissemination and promotion of the new publication through our and other social networks, with possible streamings and teasers. In September we will make public pre-presentations with authors and editors, already with the model of the object. At the beginning of October Umbra #4 will be printed and shipping to subscribers and supporters begins immediately.

You have almost two months to support Umbra #4, choose your contribution. Yours is our strength!

Join us on this journey via our channels.

Later, you can join the release event. Bring your copy and ask the authors for a doodle in person.

We count on you, see you soon!

94 members of the PPL community
support this campaign