A publication is only strong, free and independent if it has lots of readers. For that reason, we are starting our crowdfunding campaign to gather +1001 subscribers.

A publication is only strong, free and independent if it has lots of readers. For that reason, we are starting our crowdfunding campaign to gather +1001 subscribers.

From EGO to ECO.

A publication is only strong, free and independent if it has lots of readers. For that reason, we are starting our crowdfunding campaign TODAY.

We call it constructive journalism. That is what motivates us all. We write and tell success stories of everyday life, of economics and ecology. We focus on sustainability, happiness and what has been tried and tested.

ECO123 is based in Monchique, the most beautiful upland village in the south of Portugal. Because there is strength to be found in tranquillity. To us, good stories are more important than sensations, more important than headlines and clicks.  For us, topicality is not everything. While most media earn their money from crises, we report about SOLUTIONS that are Made in Portugal. These are stories that can still be read tomorrow.

We have to start with ourselves and actually live what we write about. Since ECO123 was founded, all the staff is involved in the publishing company. The company has three partners: the staff association plus two investors for the start-up funding. For two years, ECO123 has been appearing nationwide four times a year: on 21st March, 21st June, 21st September and 21st December.

A publication is only strong, free and independent if it has lots of readers. For that reason, we are starting our crowdfunding campaign More 1,001 subscribers right now. For eight editions, we have been doing hard, concentrated work to show you what we mean by good, positive journalism. Now is the right time to subscribe to ECO123: four magazines a year for 20 euros including delivery, or for 15 euros online www.eco123.info.

Stories in ECO123 are always exclusives: from the research to the publication. No copy & paste. There is also no hidden or discriminatory advertising. We make a clear separation between advertising and journalism and only write for our readers. We work for you and are incorruptible.

The principles of our journalistic culture are: we think and act positively and seek solutions, we live what we write, avoid conflicts of interests, attack no one personally, avoid discrimination on the grounds of gender, race, religion, age or sexual orientation, identify quotations, do not publish any data about our users, are responsible for safeguarding the rights of third parties and work sustainably and with the efficient use of resources. 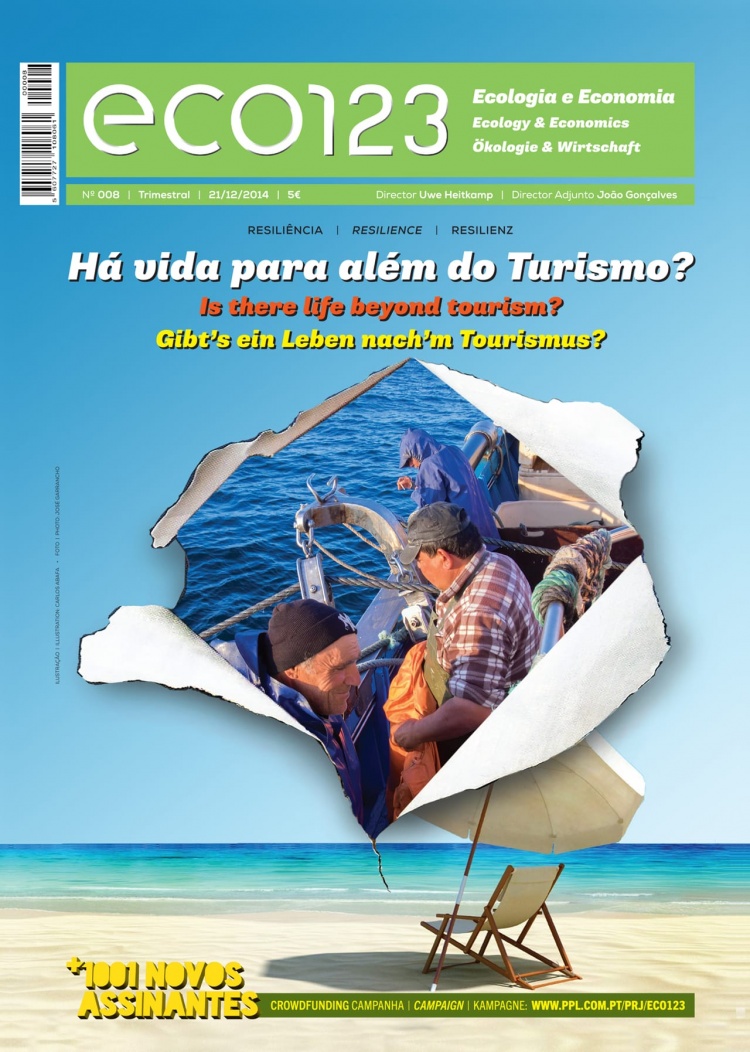 And one more thing: we all try to produce less CO2! And so every new subscriber gets free access to the ECO online game KYOTO. You can record your daily emissions there and thereby reduce your ecological footprint. ECO123 gives you important tips and advice with which you can always win at the end. www.eco123.info/kyoto. Subscribe now!

João Gonçalves, aged 32. Born in Serpa, where he lived and did all his education up to secondary school, has a degree in communication sciences from the University of the Algarve. Completed a placement at the Municipal Theatre. Has worked for a number of years as an editor and camera operator, participating in producing documentaries and short films. In 2012, he accepted the challenge of the ECO123 project where he works as an editor, camera operator, journalist and deputy director.

Uwe Heitkamp, aged 55, trained and studied to be a journalist and film-maker, editor-in-chief of ECO123, has been living in the Algarve uplands for 25 years. Worked for German Television in the 1980s. Founded the weekly newspaper Algarve 123 in 1995, and the magazine ECO123 in 2012. He lives from his own organic farming, from travelling on foot through Portugal, produces solar power and is convinced that good economic management has to be based on ecological foundations. He is an active tree planter with his own nursery.

Vasco Trindade was born in Lisbon in 1977, and trained in communication design. Over the last decade, he has frequently worked as a trainer and teacher, one of his vocations. He has been part of the ECO123 project since the outset. Representing an interesting challenge in terms of graphic design, ECO123 also enabled him to discover a wide range of situations connected with economics, ecology and sustainability. His greatest ambition is to enable his great loves – his family, including his two-year-old son and a second one about to arrive – will have the opportunity to live in a more just, more humane and more sustainable society.

Dieter Malter, aged 57, from the Taunus/Germany, father of five children and grandfather of nine grandchildren, emigrated to Portugal in 1986, reconstruction of a ruin with his own hands and first steps. From 2003 to 2010, system administrator at the CLCC in Portimão. Since 2011, working as a freelance webmaster in Monchique, since 2013 for ECO123. Active member of Transition Town Monchique and deputy chair of the environmental organisation A Nossa Terra. When he is not sitting at his computer, he grows vegetables or plants trees, sometimes goes walking, loves photography and music festivals.

António Veiga, aged 58, born in Lisbon, where he also lives, economist, accountant, member of two associations, one providing support to immigrants (Guinean Social Solidarity Association), the other promoting economic solidarity (Association of Self-Financing Communities - ACAF), he was also a basic education teacher in mathematics and subjects introducing economic activity, and was contracted to work as a technician for the Lisbon and Vale do Tejo Region Coordination Commission. Writer with ECO123 from the start.

Why €25,000? We believe that the type of journalism that ECO123 advocates – free, objective, critical, independent – cannot be financed only by advertising or by specific economic groups, but rather by its readers, to whom we make a promise of honesty and quality. The €25,000 – a third of the total budget – will ensure that the ECO123 project continues through the whole of 2015. When will the project be implemented? The ECO123 project has already been in existence for two years and will continue as long as there are readers interested in discovering alternatives and applying solutions to the many challenges which face us today. The financing will ensure that a project can continue that, in two years, has already succeeded in gaining a loyal and growing readership and mobilising resources for social and cultural projects. When will the rewards be made available? Given that ECO123 already exists as a project, the rewards will be made available immediately after the crowdfunding campaign becomes viable by reaching the financing target that has been set. All new subscribers will have immediate access to their respective services on the ECO123 website. On March 21st, when Edition 9 will be published, all subscribers to the print edition will receive the magazine in their homes and all subscribers to the digital version will be able to consult the file on the ECO123 website.


Join us so you can take a part in this campaign. Register