It’s in the nature of performing arts to be ephemeral: that's why we need to document it, preserving its memory beyond the present.

The more than 150 performances performed by the artist between 2003 and 2017, solo or in dialogue - with musicians, actors and dancers - only existed for those who were there.

The book will be profusely illustrated with stage and rehearsal photographs, including testimonies and critical reflections, and an interview with the artist. It will also explain the context of the performances, a complete listing, and a full translation in English.

This publication will carefully document an intermedia practice, which takes place in a spontaneous composition environment, fueled by the dialogue between the various performers. It will be a document to inspire a new scenic practice. The quality and size of this book means high costs of production that makes it impossible to cover through sales. It will hardly be a commercial bestseller. That’s why I the need financial support to make it happen. 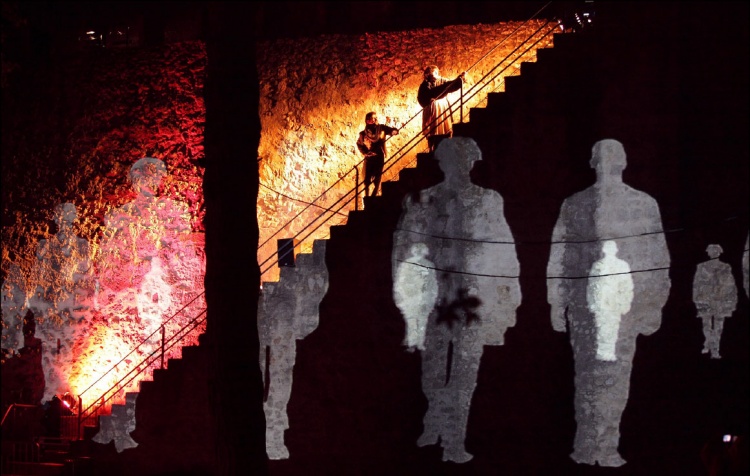 Founded in 2002, Culturproject - Gestão de Projectos Culturais, Unipessoal Lda. is a company dedicated to the management and production of art events, working in 4 major areas: Animation and Pedagogy, Special Projects, Exhibitions and Shows.

António Jorge Gonçalves holds a degree in Communication Design from ESBAL (Lisbon) and a Master's Degree in Theater Design from Slade / UCL (London), where he was a Fellow of the Calouste Gulbenkian Foundation. Lecturer at IADE and RESTART. Between 2008-2015 he taught PERFORMATIVE SPACES at FCSH (Lisbon) in the master's degree in Performing Arts. In 2015 he integrated the 10x10 pedagogical project of the Calouste Gulbenkian Foundation as an artist-teacher. He made visual direction in several plays. With Live Digital Drawing and Object Handling in Overhead Projector, he has participated in more than 150 performative actions with musicians, actors and dancers in Portugal, France, Germany, USA, Japan, Italy and Brazil. He is the author of graphic novels and has been awarded several times. His books are published in Portugal, Spain, Brazil, Germany, Italy, Colombia and Venezuela. He worked with several writers, creating  books where text and image are relate in a challenging way. He created the Subway Life project, drawing people sitting in subway carriages in various cities around the world. Since 2003, he has been a political cartoonist in Publico newspaper): he has been distinguished in the World Press Cartoon and his drawings have been published in Le Monde, Courrier International and in several collections. He was honored in 2014 with the National Illustration Award (DGLB). http://www.antoniojorgegoncalves.com/performance

Hi, good morning
THANK YOU very much for your contribuition, the basic value as been raised!
The crowdfunding will remain open 'till the end of November, for those who want to garantee their personalized copy or any of the others rewards.
I'll keep you posted about upcoming news and the delivery of your rewards.
For the moment, please write down in your planner the launch date: 23 january 2018, 6PM at São Luiz theatre, Lisbon.
Big hug, see you soon
António Jorge

90 members of the PPL community
support this campaign