Let's join us making a special Christmas eve to some families,. We will try to enrich the christmas eve dinner with the traditional cod and turkey, so that everyone can enjoy ...

Let's join us making a special Christmas eve to some families,. We will try to enrich the christmas eve dinner with the traditional cod and turkey, so that everyone can enjoy a special night.

Unfortunately, more and more families are in need of some kind of social support, unemployed couples, the elderly with low retirement, indebted families and many women (sometimes men) to whom children are left without any protection. Since thats not possible to fill all the gaps ofthese families life, we will promote an campaign , similarly to the one we've maked last year to try to make the Christmas Eve a little more special.

As we currently support about 50 families and the cost of a christmas basket, is very expensive , we are making several campaigns to get all the necessary assets.

To implement the project, we have partnered with a Association of Parents of our town (APCSA), which, together with the teachers of Santo André College, is promoting a project to collect some food items from the basket. We are also making campaigns with friends for the collection of toys and books.

As turkey and cod are traditional dishes of "our Christmas", we decided to make this campaign one more time to reach all families. 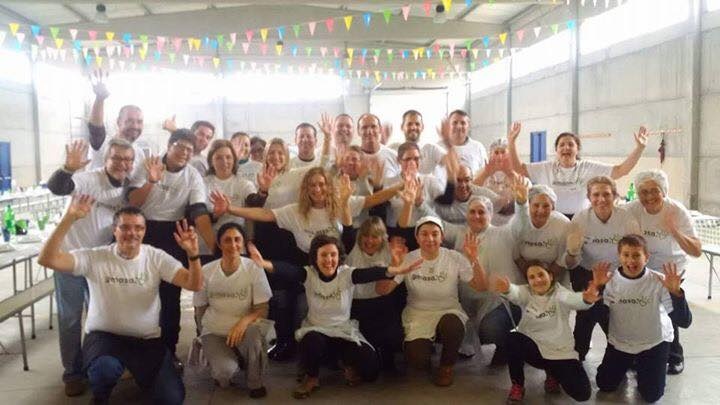 In 2009 a group of scouts from the grouping 1188 of Milharado, sensitized with the problems with the homeless  people decided to help the association C.A.S.A. However, with the entry into the faculty of the mentors of this project, they requested the help of parents and friends to give continuity to the project so the cause will not be abandon.

So the G.M.A.S.A. was born. The parish of Milharado, recognizing the importance of the project, gave a space in the facilities of the Day Center where, every Sunday, the meals began to be prepared and then transported and distributed in Lisbon in a van of the Parish Center. In 2014 it became official as a non-profit association and CMM gave a space on a "lending" basis for the new headquarters in "Casais da Serra". On a weekly basis, the volunteers prepare about 250 hot meals that they distribute throughout the city of Lisbon, to the homeless and to the needy people who go to the vans. And about 40 hot meals are distributed in the neighborhood. G.M.A.S.A. Seeks to help not only the homeless but also those who, although they have a roof, due to increased economic shortages, are no longer able to meet all monthly expenses and have to rely on the help of associations to feed themselves. We live in a town compose with a rural population and a "migrant" population of middle and lower middle class who moved from other towns in previous years in search of a better quality of life and even jobs, although nowadays , this group of people, finds itself mired in debt and without the minimum conditions to support their family.

The high price of transport, the increase of taxes and reduction of wages or even unemployment has led to the increase of this "shameful poverty". In the universe of the villages where we give more support, the number of children is around 4000, being foreseen that about 5 % of them have some kind of need. To better extend support to these families, G.M.A.S.A collaborates with some schools where requests for support arrive. As the competent social services take some time to act becouse of bureaucratic processes, G.M.A.S.A. grants the possible support, through the allocation of food baskets, during this period of time. The G.M.A.S.A aims to be an emergency support that works on the basis of good faith and trust of those who live daily with children from poor families. In some cases the school acts as an intermediary, so that we don’t have any direct contact with families in order to avoid embarrassment. All goods are raised through patronage and many volunteers.