A Middle Eastern restaurant for the integration of refugees

Fatima, Mouna, Reem, Rafat, Luei and Shiraz came from Syria. They are ready to start cooking. In Mezze, we will use the skills that so many refugees bring with them and share th...

Fatima, Mouna, Reem, Rafat, Luei and Shiraz came from Syria. They are ready to start cooking. In Mezze, we will use the skills that so many refugees bring with them and share the Arabic culture at the meal table.

We are currently facing the largest wave of refugees since World War II. Should we just stand by and do nothing? We think not. Pão a Pão Association developed an inclusive pioneering project in Portugal: a restaurant where the majority of employees are refugees, and where they can maintain a connection to their culture through food and mealtimes.

Because bread is one of the elements that connects us to home, Mezze will be a space where Arabic bread and many of the dishes that go along with it will be prepared and served. We will be able to taste yalanji, fattoush, kibbeh, hummus, or baklava, all made by hands who carry a lot of stories and a lot of hope in a new beginning. Which starts here. Fatima, Mouna, Reem, Rafat, Luei, Shiraz… had to leave Syria. They, along with other refugees, are ready to start working in Mezze and share with us the amazing cuisine from the Middle East.

There will be also workshops of gastronomy, music and dancing. Everyone will share whatever they have with those who don’t have anything. Mezze will be, above all, a meeting place – between refugees, between them and the local community, tourists, immigrants…

We will use the skills that the refugees bring with them and give them tools so that their work can be valued and professionalized. Thus, we are creating a self-sustainable job-creating solution, and contributing to true inclusion, through a non-profit model that will then be replicated in other places across the country. But we need you to also want to be part of this.

We will open the first Mezze restaurant in May 2017, and we have already guaranteed:

- A space, in the newly-renovated Arroios Market (Mercado de Arroios), in Lisbon;
- Legalized entity;
- Training for the refugees in the restaurant industry;
- Support to language learning;
- An expansion model;

But we still lack the equipment. We need to buy ovens, stoves, pans, tables, chairs… 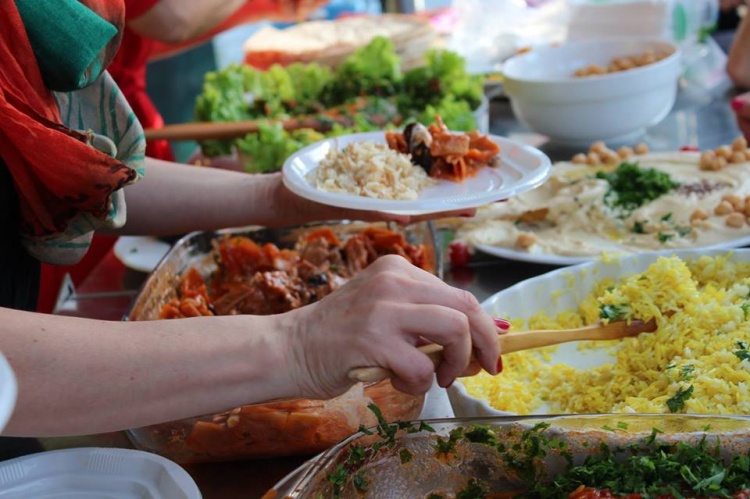 Pão a Pão Association is a non-profit organization created by three Portuguese and one college student from Syria – Alaa Alhariri. We got together to create this project because we felt we had to do something to address such a tragedy. We come from different backgrounds (social entrepreneurship, management, journalism, architecture), but we hold the same belief. Integration is an issue that concerns us all.

Among the partners we gathered, we want to mention the Lisbon Council, the High Commission for Migrations, the Refugees Support Platform, EDP Foundation and SPEAK. We also have with us Catarina Furtado, a Good Will UN Ambassador.

Thanks to the contribution of several partners, we have already secured a lot of elements. But we still need to source 15.000€ for restaurant equipment by 28 April. This amount will allow us to buy some of the equipment we lack and it will be used solely for this purpose.

Dear supporter,
Mezze opened its doors three weeks ago and it's already a huge success. Our team has been working hard to meet all the enthusiasm created around Mezze. Now it's time to share it with you. To get your reward you just have to show up (we don't do reservations and we are open from Tuesday to Saturday from 12.30pm-3pm and from 7pm-10.30pm) and leave your name and email.
The rewards are:
10€ - a jar of hummus
20€ - a jar of hummus with Arabic bread
30€ - a full meal (one mezze menu, a glass of wine/tamarind juice/water and dessert)
50€ - a full meal plus workshop - we will let you know the dates as soon as possible

Once again, thank you so much for your support. Shukran!

Dear Pão a Pão Friend,
We have great news: Mezze is ready to start! The opening party will be held on September 15th at 6:00 pm in Arroios Market, in Lisbon, and we hope to see you there. From 19th the restaurant will be open to the public. Soon you will get more information on how to use your reward.
See you at Mezze!

Dear supporters,
Today we ended our fund raising campaign to finance the new restaurant Mezze with tremendous success (we raised 23.020 euros). Also today, our team started a formation course in the Culinary School of Lisbon. So we are very close to the grand opening of the first restaurant in Portugal that will integrate refugees from the Middle East. We know how this will change the lives of Fatima, Rana, Rafat, Mouna, Reem, Luei...
A very big thank you to all and congratulations for this big achievement.
See you soon at Mezze!
Associação Pão a Pão

P.S. The compliments promised to you will be waiting at Mezze. Just book previously and we hope to see you soon. We are planning to open in mid-June.

354 members of the PPL community
support this campaign