Their dream, our mission!

The Mulheres de Vista Alegre Association dedicates itself to the transformation of natural and local resources and simultaneously to the comercialization of the final products. ...

The Mulheres de Vista Alegre Association dedicates itself to the transformation of natural and local resources and simultaneously to the comercialization of the final products. We need your help to grow our bussiness, which will, in turn, contribute to social development in the Roça Vista Alegre, to its population and to São Tomé.

The Mulheres de Vista Alegre Association dedicates itself to the transformation of natural and local resources and simultaneously to the comercialization of the final products. This business was born with the help of Santa Casa da Misericórdia with the objective of promoting employment in the Roça where there was, and still is, a lot of poverty and little financial resources to make the most of nature is offering. Therefore the ‘push’ given by Santa Casa da Misericórdia helped motivate agricultural work in the community and its consequent benefits.

The Vista Alegre Roça is situated in the Mé-Zóchi district, approximately 10km from the São Tomé city at an elevated point in the Island, offering priviledged views which explains its name which translates to “Joyful View”.

It is a very small community and quite isolated given the local and transport circumstances, and with low employability. Overall there are roughly 220 people living in the Roça, of which 130 are children (60%). Of the adult population, a majority is made up of women, who on average have 4 to 5 children. This demographic situation is evidently worrying in a population with little to no emplyment available.

Additionally there is little movement in the roça and it is very unknown both to local and to foreign visitors; this is the case despite the beautiful views and the colonial structures still being there and available to visit. Currently, the Association produces dry banana, boxes and dolls made from banana tree leaves and mango, cajamanga and papaya compotes, Its main focus and most popular product is the dry banana whilst the remaining are custom-made upon order.

To allow the Association to grow and devlop, the capacity to produce has to increase to be able to respond to the market demand there has been in the past months which is not possible with the seven solar dryers- there is an urgent need for, at least, two more dryers!

The Association is currently made up of seven working women. Below are the descriptions of each member of the team:

Grétinazilza, 34yo: Entered the Association with the second women’s group to be formed and is now the President who dreams of employing the maximum number of women possible to see her community grow.

Arlinda Duarte, 37yo: Arlinda was one of the five women hwo first started the Association. She initially joined not only because she was unemplyed but because she saw a way to help her community grow and prosper. Her energy and enthusiasm are contageous to anyone who gets to meet her.

Agostinha, 39yo: Joined the Association at the start with the aims: creating jobs in the community, guide women who are looking for jobs towards the Association, and get some extra revenue for her family. At the moment she is pregnant with her sixth child and is responsible for the registers for accounting.

Chácu, 39yo: Joined the Association with the seocnd group along with Grétinazilza and is currently working two jobs. She accepted the invitation to work at the Association because she believed she could help the group and the community grow.

Cristina, 42yo: She has been part of the team since Day One and is commonly known as “Bubuca”. She has been a motivating member and fights for the team’s success on a daily basis.

Antónia, 50yo: Joined the Association with the second group of women as she was also unemployed. Currently she works another job at the same time in agriculture in the Roça as she needs the extra revenue to help her family.

Arminda, 41yo: Arminda is part of the team since the beginning and joined because she was unemployed and wanted to help her family; she does anything that is needed for the Association and its members- always ‘on call’. 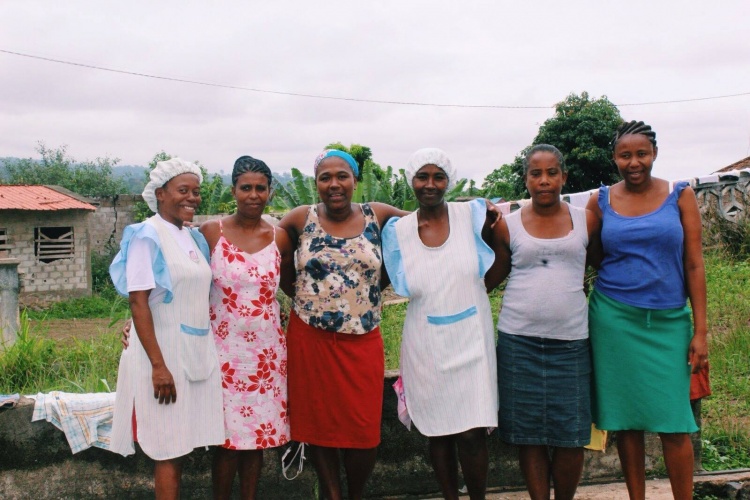 To purchase the two dryers and therefore increase production and turn the business sustainable, we need 700 euros!