Quercus carried out a groundbreaking campaign within the environmental movement in Portugal to acquire land for the nature conservation in the Tagus international (“Tejo interna...

Quercus carried out a groundbreaking campaign within the environmental movement in Portugal to acquire land for the nature conservation in the Tagus international (“Tejo internacional”) region. Today, a new opportunity to purchase another site of 80 hectares has arisen with the aim to protect and conserve Biodiversity.

In 1987, Quercus carried out a groundbeaking campaign within the environmental movement in Portugal to acquire land for nature conservation in the Tagus international (“Tejo internacional”) region. This campaign aimed to protect the endangered fauna and flora in the Tagus International Nature Reserve, in order to prevent our native forest and endangered fauna from being destroyed by eucalyptus plantations and illegal logging. At the time Quercus raised funds to purchase 600 hectares (ha), and has, over the last 30 years, intervened in various reserves to promote the recovery of biodiversity. Thanks to these efforts, species such as the black vulture and the Iberian imperial eagle have once again returned and chosen Portugal to build their nesting grounds, priority habitats such as the bushweeds (dominated by Flueggea tinctoria) and various species of threatened flora such as the Portuguese lily have recovered in these areas.

There is now a new opportunity to continue this task by extending one of the reserves by another 80 ha, the land that we intend to acquire share boundaries with a 430ha property which is owned and managed by Quercus. 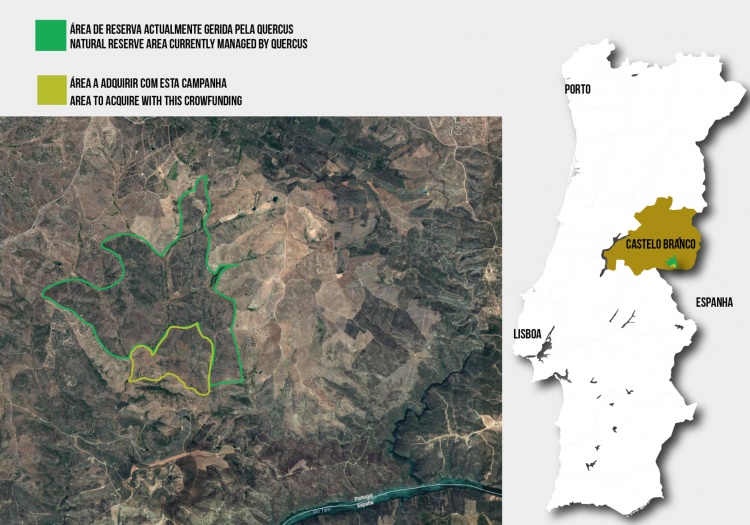 This new site will allow the recovery of another 800 meters of the “Ribeira do Marmelal” banks, a river with priority habitats of conservation such as the “tamujais” bushweeds (Flueggea tinctoria) and ash trees and with presence of species like the Europeanpond turtle (Emys orbicularis) and the Portuguese bogue.

This acquisition will allow for the conservation of over 40ha of cork oak forest and 20ha of Azinhal forest where several hundred species live, some of which are in danger of extinction.

With this acquisition Quercus will manage an area of more than 680ha, where we will continue to safeguard the natural values, increasing the knowledge and the protection of biodiversity.

Quercus has been advocating the recovery of habitats and species in this area, by raising awareness of environmental education, nature (wilderness) tourism, reforestation and recovery of waterlines, a vulture feeder, removal of invasive alien species, rehabilitated animals are returned to nature among many other initiatives. This work has been carried out through partnerships and collaboration with other local players, local associations, municipalities, companies and public authorities.

These areas will be conserved and managed according to the philosophy of the Rewilding Europe project, an initiative that aims to create more spaces in Europe and corridors for nature...

Quercus is an independent, national, non-partisan, non-profit organization and is composed of citizens with the same interest in the Conservation of Nature and Natural Resources as well as in safeguarding the environment in general, according to a sustainable development.

The designated name of the organization, Quercus, is the common Latin name attributed to the oaks, the holm oaks and the cork oaks. These trees characterize the most evolved forest ecosystems that covered Portugal where only a few remnants still exist.

Over the years, Quercus has played an ever-increasing irreverent and constructive role in the defense of multiple causes of nature and the environment in the Portuguese society. Today, its framework for action encompasses a number of thematic areas of environmental relevance, including nature and biodiversity conservation, energy, water, waste, climate change, forests, sustainable consumption, environmental accountability among others. This specialized supervision is largely supported by the work developed by various work groups and a constant involvement of projects.

This status was progressively conquered through the attentive vigilant tracking and documenting of reality, without losing sight of the relevant focal principles, as well as the needs to complement the critical reporting with the effort to build consensus in Portuguese society, without which no effective model of sustainable development will be possible in our country.

Quercus is characterized by its decentralization, where 18 regional offices (“Núcleos Regionais”) cover the entire country, including the autonomous regions of the Azores and Madeira. Thus, allowing for Quercus to monitor the environmental reality and carry out awareness-raising activities within its geographical coverage.

In 1992, Quercus received the United Nations Environment Programme (UNEP) Global 500 Award and the title of honorary member of the Order of Prince Henry the Navigator (“Ordem do Infante D. Henrique”).

The money from this campaingn will be used only to by this land and this 20,000  is the part we still need to achive  the total budget.

Dear supporter, on behalf of QUERCUS, we want to thank you for your contribution! We surpassed the objective of this campaign with 21.722 € Euros raised with 500 supporters! We will continue to protect Nature and promote knowledge and environmental education! Thanks!

500 members of the PPL community
support this campaign

Quercus works for a better environment and sustainability in Portugal,defending the common good in the present and for future generations

Quercus works for a better environment and sustainability in Portugal,defending the common good in the present and for future generations