"Apreço", a novel that will celebrate the culture and experiences of villages in the 1980s.

"Apreço", a novel that will celebrate the culture and experiences of villages in the 1980s.

In times of the Portuguese Colonial War, still very young, Carlos goes alone to Porto in search of following his studies, leaving his parents in the village, while his brother Luís is sent to fight in Guinea.

Years later, life plays a trick on him, Carlos returns to his home village and leaves his dreams behind. Lost and aimless, between the water that came down from the mountains and an unexpected innocence, something changed his life, however, not everything was rosy.

This film is being produced independently, with the aim of reaching national and international cinemas.

The Author and Director is João Oliveira, his participation in the field of cinema has been developed mainly as Director of Photography, in “Aquarium” and “Stamp” by director Joana Correia Pinto, “Eu&Eu” by Passos Zamith, and “Lulu”, a film by Pedro Anjos, but as he was the creator of this story, he could not fail to embrace the challenge of directing.

Production of Appreciation is being developed by Aida Silva, producer of short films such as “Aquarium”, “Stamp”, “Matrioska” by director Joana Correia Pinto and the documentary “1/4 de Glória”. He also has experience as a production assistant on “Eu&Eu”, “Razia”, “Solda” and the films “Arquitetura de uma Impossibilidade” a film by Carlos Ruiz Carmona and “Lulu” by director Pedro Anjos.

In Co-Production with Opposite Records, a work platform, dedicated to audiovisual, film production, documentaries, music production, among other things, represented by António Passos Zamith, a cinema enthusiast with experience in the production and realization of short films such as “Cinco Cigarrilhas”, “Chaço 92” and “Eu & Eu”.

Appreciation has the logistical support of the Vila Verde City Council, as well as the support of the Parish Council of Dossãos, which from the first moment showed interest in supporting the project.

At this stage of the project there are still several elements of the team to be confirmed and we remain open to new partnerships.

We defined 7 thousand euros as the minimum amount for this campaign as it is the amount that we consider acceptable to continue the pre-production of this film. Our ideal goal is 10 thousand euros. However, we know that a film cannot be made with 10 thousand euros, not even in Portugal. This campaign has a value cap that is only 10% of the approximate value we need for the film's production.

We are defining this value as a limit, as it is the minimum amount necessary to be able to cover pre-production expenses. Travel for réperage, historical research, script writing and recording, art direction, props, wardrobe and other production expenses.

You can view the graphical representation of expected expenses during pre-production. 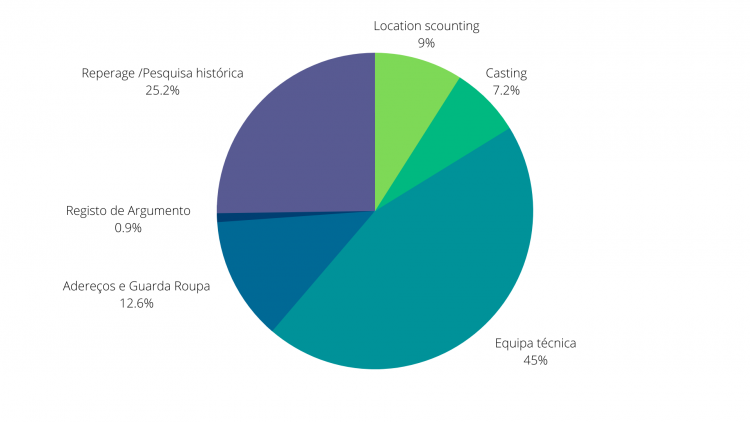 Anyone in the field knows perfectly well what all the pre-production of a film consists of. However, below is a summarized timeline of the areas that work on the film begins long before the shooting days, and some of the main categories in each section. 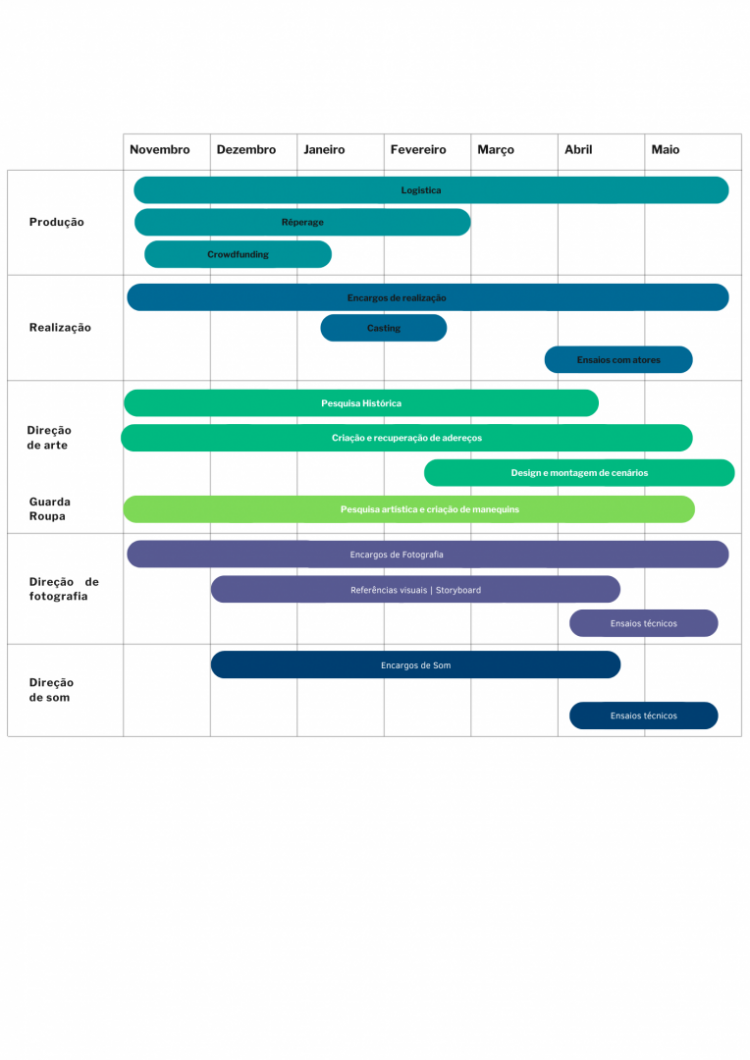