Under the Master's project work in Performing Arts - present interpretation, the student at ESTC plans to set up an air theater show based in "A Dream" and "Hell" by August Stri...

Under the Master's project work in Performing Arts - present interpretation, the student at ESTC plans to set up an air theater show based in "A Dream" and "Hell" by August Strindberg, using techniques of circus apparatus.

The main objective of this final master work is to build an air theater show, based on a theater text where the "word" reigns. In this version the text is spoken narrative and air body movement of the actors will be the visual narrative. Because it is possible to Strindberg hanging from a trapeze and because you can make a Agnes, daughter of Indra, down to a vertical fabric while analyzing the heavy and human suffering of the Earth's inhabitants. Because a fixed trapeze can be a window of "a dream" and a vertical fabric can be slide to hell.

Because the Art should be rich in diversity and why is needed "a dream" and theatrical air.

And, above all, because a master's degree in performing arts there to risk and try, above all, innovate and contribute to a growing cultural diversity in our country. 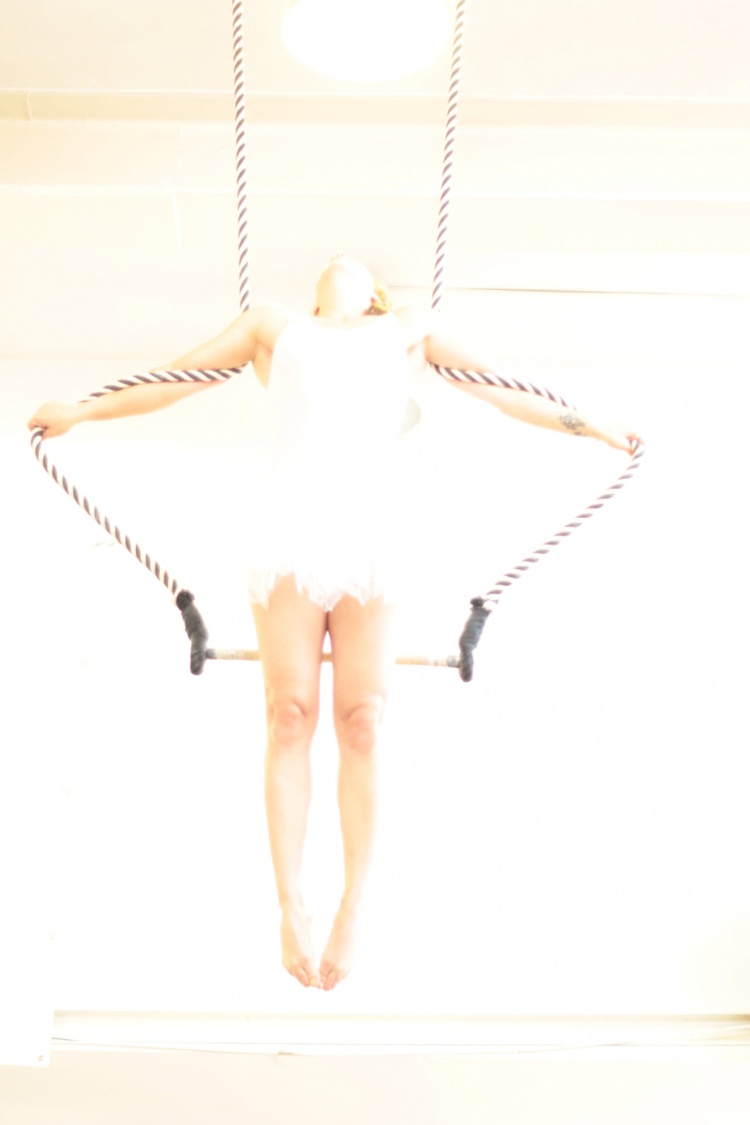 John Ascenso - He debuted as an actor in 2000 at the Teatro Cinearte. He is a member of the Theather Company "Companhia de Actores" and collaborates regularly with the Plano6. It is also author of the plays "Seiis ... Quase Meia", "Não Há Culpa" and "A Noite do Choro Pequeno."

José Lobo - began his training as a circus artist, dancer and actor in 2003 at Chapitô. Ends in 2010 Degree as Actor in ESTC. Connecting the theater with the aerobatic singing and dancing.

José Mateus - debuted in 1994 in the theater group "O Bando". Since 2008 belongs to the Cultural Association Gato que Ladra, where it plays the vice chairman. You are attending Master in Performing Arts - Interpretation at ESTC.

Ruy Malheiro - Actor since 1997, collaborated with Escola da Noite and Trigo Limpo. He is a collaborator of Companhia da Esquina and Production Director of Escola de Mulheres and Buzico! Artistic Productions. You are attending Master in Performing Arts - Interpretation at ESTC.

Susana Alves Costa - Since 2004 collaborates with the Barraca Theatre. He is co-founder of the Theatre-Circus Gato Ruim Company, which creates and participates in theater-circus shows.

Miguel Freire - believed in body and mind as research tools to access our potential. He graduated in Theatre from ESTC, studied mime and physical theater in London and intends to continue to learn.

Livia Heinrich - Graduated in Architecture and Urbanism from the Universidade Santa Ursula in Rio de Janeiro. Designed the scenery for the show "Imagine It" vocal quintet Women Holland and vocal quartet 4Cantus. He attended the Design Master of the Faculty of Fine Arts, University of Lisbon.

This show, which belongs to my final work of Master in Theatre -. Interpretation at ESTC will be presented on 24 and 25 July at the Black Box of the Centro Cultural de Belém Getting the CCB support for the transfer of this room made possible the presentation the show on two consecutive days and on stage with the nature and size of possible stages of a future season in Lisbon or on tour. The room I was assigned for free, because it is a draft Master, but I have to pay the cost of front-room for the 2 days of presentations. The presentations, for the case of a transfer room, must be only by invitation of the cast, the ESTC or CCB may not be sold any ticket access to this show these dates and in this room. Note that the artistic team of the show consists of 6 players, 1 light designer, 1 soundman, 1 set designer and one graphic designer and we all will work at this stage to "A Dream" come without any expected yield.

Thus, this crowdfunding will consist solely for raising spending value with the front-room, people responsible for forwarding the public the place and people essential to the presentation of a show in the CCB room.

Being the presentation of the show in this raising this value of the dependent room plan to get full funding until the day June 30, 2015.

46 members of the PPL community
support this campaign