Parklet is a strategy of enlargement of the sidewalk done through a platform located in a parking place.

Parklet is a strategy of enlargement of the sidewalk done through a platform located in a parking place.

Parklet is a strategy of enlargement of the sidewalk in urban areas where there is a lack of open spaces, held by a platform in a space formerly occupied by a parking place. It aims to increase the local public spaces in the city, encouraging the permanence in the street and the use of local businesses.

Parklet emerged in the city of San Francisco and has been successfully implemented in cities like New York and Sao Paulo where there was an increment of the use of public spaces, the use of bicycles and the use of local businesses.

The Parklet can be equipped with benches, tables and chairs, small trees or other shade structures, in order to promote the permanence and socialization. It may also include parking facilities for bicycles, among other street furniture elements.

1. Increase the public spaces - The increment of te sidewalk with a parklet is a low-cost strategy of creating small public spaces of living and permanence.

2. Promote living on the street - Promoting social and living spaces in the streets increases the sense of community, safety and encourages local businesses.

3. Encouraging participatory processes - Involvement of the local community in supporting the creation and maintenance of this equipment, allows a better understanding of public spaces as collective spaces.

4. Encourage non-motorized transport - This strategy is also a manifest regarding the percentage of public spaces in the city, occupied by motor vehicles. Encouraging the temporary reduction of parking in certain streets, these platforms will promote the use of bicycles and other non-motorized vehicles. 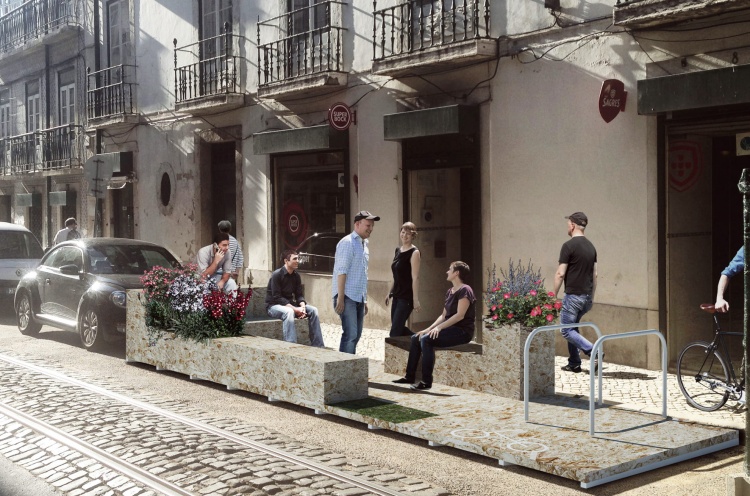 Rés do Chão (ground-floor) is a project of rehabilitation and urban regeneration. Its main objective is the revitalization  of the cities through the reoccupation and rehabilitation of vacant ground floors. It is a project awarded by the Calouste Gulbenkian Foundation and supported by the BIP-ZIP program of the Municipality of Lisbon.

Since 2014, it occupies an old grocery store in the no 119 of Poço dos Negros street in Lisbon, where it develops a shared and temporary occupation system, promoting sustainable forms of occupation. In addition to host the headquarters of the Ground Floor Project, it is a work space and a shared store where various events and activities are organized. The ground floor 119 is currently occupied by various designers and artists who produce and sell their products.

The ground floor has been published in various media, standing out as one of the 50 + 1 Ideas to survive in 2015, according to the weekly newspaper Expresso and has been supported by various partners and local associations.

Rés do Chão was founded in 2013 by four architects - Margarida Marques, Mariana Paisana, Marta Pavão and Sara Brandão, under the competition FAZ - Ideias de origem Portuguesa, promoted by the Calouste Gulbenkian Foundation in partnership with the Institute for Social Entrepreneurship and supported by Cotec Portugal. Since 2015 Rés do Chão has collaborated with the anthropologist Manuel António Pereira and for the Parklet Project has partnered with architect urbanist Guilherme Bivar Marques.

Rés do Chão looks for solutions that contribute to the increase of occupied and revitalized ground floor spaces, with the aim of promoting the rehabilitation of the built heritage and public spaces, the functional diversity of the streets and the development of local economy. The Parklet strategy supports and development all of these objectives.

The budget is meant for the construction of the Parklet platform located in Poço dos Negros Street. The budget includes the construction materials and the labour, it will, probably, inaugurate on June 6 associated with the anniversary event of the first year of Rés do Chão 119. The Parklet will be in place between 6th and 13th June.

25 members of the PPL community
support this campaign