The resurgence of the "classical" mandolin that occurred in Europe in the mid-twentieth century, slowly begins to flourish in Portugal. For this has contributed the work done by...

The resurgence of the "classical" mandolin that occurred in Europe in the mid-twentieth century, slowly begins to flourish in Portugal. For this has contributed the work done by...

The resurgence of the "classical" mandolin that occurred in Europe in the mid-twentieth century, slowly begins to flourish in Portugal. For this has contributed the work done by OPGBAC - Plectrum Cultural Association, which through its various valences, tries boosting the national plectrum music scene. The Portuguese Mandolins and Guitar Orchestra  (OPGB) with nearly 40 concerts in Portugal and Spain in the five years of its existence, is quite revealing of the revolution that OPGBAC worked in this medium. 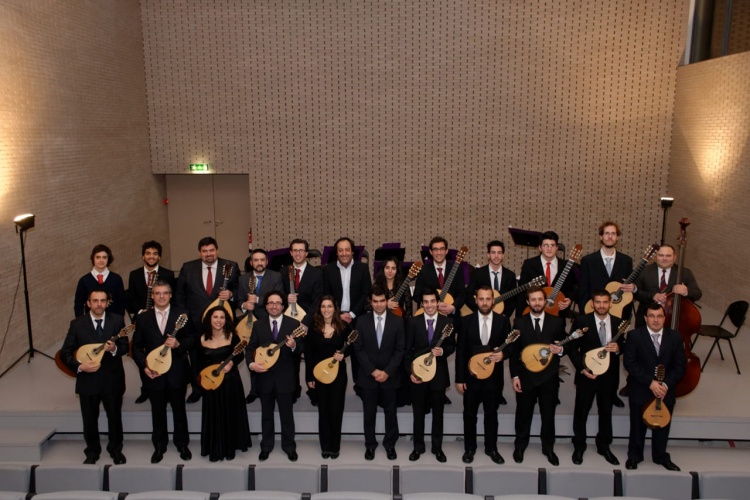 In recent times, the OPGB began to debut pieces from different composers, which shows the prestige we have already reached. Here are some examples:

2 "Exultate Deo" for Plectrum Orchestra and Children's Choir, by portuguese composer Osvaldo Fernandes, under the direction of Conductor Helena Lima Venda, May 12th 2013 at the Igreja Matriz da Apúlia, in Esposende.

4 "Paseo", by French composer Érik Marchelie, July 18th, 2014 in the auditorium of the Casa das Artes in Oporto, under the direction of Maestro Augusto Pacheco.

The OPGB still has planned premieres of works by composers David Miguel and Paulo Bastos. The project of this recording will be unique nationally. An orchestra of guitars and mandolins performing and recording works were dedicated to them, showing the music of plucked instruments in all its splendor.

To lead a promising group like OPGB in the national music scene, interpreting works of composers in various national premieres, we will have the honor of receiving one of the greatest figures of the music world plectrum: Luxembourgish Maestro Juan Carlos Muñoz.

Also, one of the works to be recorded is "Acerca de la Felicidad", by Spanish composer Javier Riba, which will have the renowned guitarist Rui Gama playing the soloist part.

A few videos of our path can be seen on the official OPGB on Youtube.

On November 18th, 2010 the Cultural Association of Plectrum was born. It’s a project of disseminating the plectrum music in Portugal, where it intends to create a space of uniform technical development. The OPGBAC sees the mandolin as a prime instrument for which works were composed by the most famous names in the history of music as Vivaldi, Caldara, Mozart, Hummel, Beethoven, Verdi, Mahler, Schoenberg, Webern and Boulez.

The main valence of this association is the Portuguese Mandolin and Guitar Orchestra, a group that has received the most accolades for the unique character of their sound and the interpretive rigor presented. The Orchestra has currently effective with 17 musicians, distributed as follows:

The Artistic direction is in charge of António Vieira.

Manuel António de Sousa Vieira began his studies at the Conservatory of Music in Maia where he studied classical guitar with Ricardo Barceló and João Campos. He finished the complementary course of Mandolin at the Conservatory of Music of Coimbra with 19 values in the class of Professor Flávio Pinho. Then enters the Conservatory of Esch-sur-Alzette in Luxembourg where he studied with the virtuoso Maestro Juan Carlos Muñoz, the courses of Neapolitan/baroque and chamber music mandolin. In the same conservatory studies "Déchiffrage" with Francesco Civitareale and coral direction with Thomas Kramer. Completed courses for chamber music and mandolin in several countries, under the guidance of such names as Juan Carlos Muñoz, Mari Fe Pavón, Mirko Schrader, Caterina Lichtenberg, Marga Wilden-Husgen, Keith Harris, and Francesco Civitareale . It is the single portuguese element of th European  Guitars and Mandolins Orchestra- Il Forum Musicale. Has collaborated regularly with the Société Mandoliniste "LA Lyre" Godbrange and the Ensemble Plectre Municipal d'Esch-sur-Alzette since September 2008 and has acted in most of Europe (Spain, France, Luxembourg, Germany, Italy, Greece…). It is the invited musician to perform various parts of mandolin in portuguese orchestras, having already collaborated with the Symphony Orchestra of the Casa da Música in Porto, Orchestrutopica, Remix Ensemble Casa da Música ... under the direction of Christoph König, Peter Rundel Emilio Pomàrico, John Storgårds, Olari Elts and Andrew Litton.

The Cultural Association of Plectrum is a non-profit. Thus, the money that we raise will be applied only on expenses related to the capture, mixing, mastering, recording, as well as graphic work and CD duplication. The budget (estimate) divided as follows: - Recording (capture, mixing, mastering) - 800€ - Duplication - 1,180€ - Graphic Design - 250€ - Travel Expenses of the Maestro (Luxembourg - Porto) - 300€ The budget surplus of the amount raised will be supported by the Cultural Association of Plectrum. We expect to have the finished recording in January 2015, and the final product ready for distribution at the end of the first semester of the same year.

80 members of the PPL community
support this campaign