I study at Escola Superior de Música de Lisboa, I am in the second year of degree and I do not have a TUBA. I intend with this campaign to acquire monetary support for the compl...

I study at Escola Superior de Música de Lisboa, I am in the second year of degree and I do not have a TUBA. I intend with this campaign to acquire monetary support for the completion of my studies and for the continuation of my career.

My name is Miguel Canada, I'm 20 years old and I'm from Madeira, but I'm currently studying at the Escola Superior de Música de Lisboa and I'm in the second year of my degree in the performer instrumentalist variant.

I started my musical studies in the Banda Municipal de Machico in 2008, and the tuba was not my first instrument but the clarinet, then the trombone and finally the tuba. In spite of my passing through the learning of both the clarinet and the trombone, it was the tuba that most aroused my curiosity being to this day the instrument that accompanies me and with which I design my life. I'm halfway through my degree and unfortunately I do not have an instrument of my own.

I have had the happiness throughout my academic progress, to be able to count on the help of both teachers and schools, and have been able to evolve as a musician through instruments provided by both. Thanks to these awards, I recently won first place at the Prémio Jovens Músicos 2017  in the category of Tuba Superior Solo Instrumentalist.

Most of the people outside the musical medium may have no idea of ​​the costs that a musical life brings, especially when we speak of musical instruments, and this is the reason for this campaign, raising funds that will enable me to purchase a tuba.

Unfortunately, I can not afford these costs, so I ask for your help because without this instrument I can not continue my studies and my humble career. José Miguel Batista Canada, from Machico, Madeira, Portugal, was born on May 9, 1997.

In 2008 he began his musical studies in the Banda Municipal de Machico, in Tuba.

In 2010 he joined the Basic Professional Instrumental Course in the Tuba and Euphonium class of Professor Fabien Filipe at the Conservatory - Professional School of the Arts of Madeira.

In 2011 he participated in the Classical Orchestra of Madeira.

He has participated in five consecutive years (2012-2016), at the OJ.COM Orchestra Stage, which took place in the cities of Aveiro, Braga, Lisbon, Azores and Porto.

In 2013 he joined the Professional Instrumentalist Course at the same Conservatory. That same year he participated in the International Forum of Musical Interpretation and Pedagogy, where he obtained the 1st place in the categories of soloist and chamber music (Tuba Quartet and Brass Quintet). 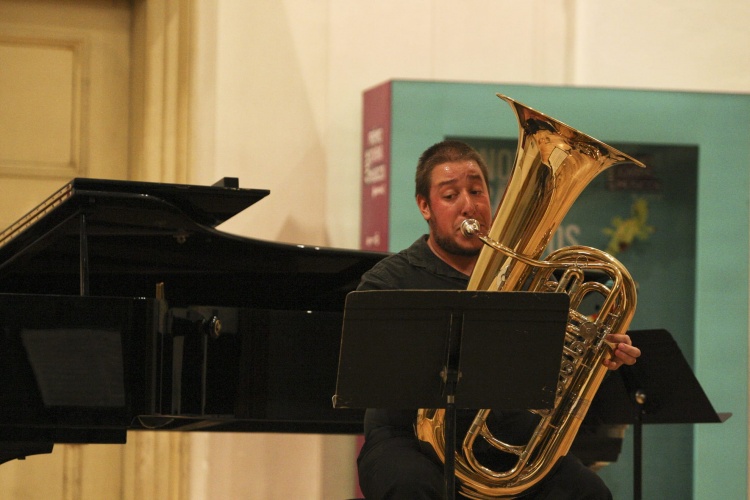 In the year of 2016 participated in the program ERASMUS + "Music Without Frontiers" in the city of Lahti in Finland. He also completed the recording of a CD with works of his own of children's songs. He finished the Professional Instrumentalist Course at the Conservatory - Professional School of the Arts of Madeira, finishing with a maximum grade (20 points) in the final recital. In the same year he starts his graduation in Tuba at the Escola Superior de Música de Lisboa in the Tuba and Euphonium class of Professor Adélio Carneiro. He also participated in the Lisbon Film Orchestra later that year.

In 2017 he participated in the XII edition of the International Contest of Wind Instruments "Terras de La Salette", where he obtained the 2nd place. He recently reached the 1st Prize in the Prémio no Concurso Prémio Jovens Músicos, promoted by Antena 2 in the category of Tuba in solo instrumentalist, having the opportunity to play solo with the Gulbenkian Orchestra in Lisbon.

Normally a tuba, like many other instruments, is a high-value instrument. Sometimes the price of a new instrument of professional level, can reach and even surpass the 8000 €.

Given that I have been in this situation for some time now, the help of this campaign is crucial in order to be able to acquire an instrument as soon as possible.

115 members of the PPL community
support this campaign