The project HANDS consists of a short dance-video of 3 minutes with a message against discrimination. Sara Toscano gathers artists from four countries to combine movement, poetr...

The project HANDS consists of a short dance-video of 3 minutes with a message against discrimination. Sara Toscano gathers artists from four countries to combine movement, poetr...

The project HANDS consists of a short dance-video of 3 minutes with a message against discrimination. Sara Toscano gathers artists from four countries to combine movement, poetry, video, music and photography to create a universal message for equality. The project is inspired by the work of Magenta Foundation, an independent organization based in The Netherlands that successfully combats discrimination internationally, on and through the Internet.

Sara Toscano from Portugal will choreograph a tailored-made poem written by Thomas Tsalapatis from Greece, based on the idea that with two hands one can build, destroy, create and help. The poem will be adapted to music by Manos Athanasiadis from Greece and sang by Tena Stanic from Croatia.

The video-dance will be published online on the 21st of March of 2015, on the International Day Against Racism and will include a message written by Ronald Eissens and Suzette Bronkhorst, active leaders in the defense of human rights since 1992. The video-dance will be sent to Magenta's extensive mailing list, to forums and blogs that work against discrimination and will be published on Magenta's website, on the webpages of selected NGO's and in social media.

The choreography will be captured in photography by the Portuguese artist Alexandre Cabrita and the pictures will be published alongside with both texts in a booklet. The booklet will be distributed among NGO's and the public at large as a wake-up call to end discrimination. 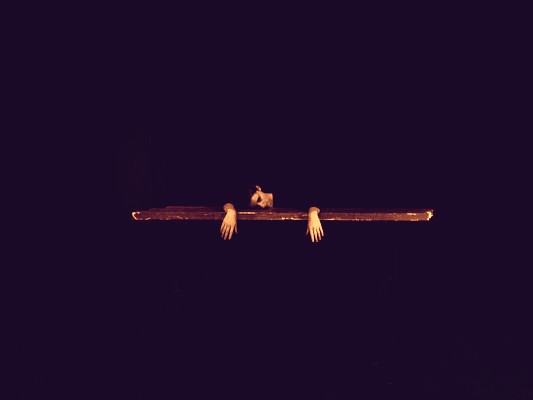 Sara Toscano (Portugal) is a dancer and a certified dance teacher by the Rotterdam's Foundation for Arts' Education (Stichting Kunst van Rotterdam) in The Netherlands. She has specialized in Middle Eastern and North African dances, exploring the relation between dance, stories, symbols and meaning. Sara has worked for the dutch foundations Stichting Akros and Vrouw en Vaart, as part of their integration program for immigrants and their women capacity program. With a degree in Advertisement, Sara has also studied theater and visual arts.

Thomas Tsalapatis (Greece) is a journalist and a writer. After concluding his degree in the Faculty of Theater Studies in the University of Athens he wrote and co-directed the play “All the clocks in the City” and translated the book W.B Yeats in collaboration with the poet Michalis Papantonopoulos. His first poetry collection ‘Dawn is Slaughter Mister Krak’ was release in 2011 by Ekati Publishers for which he was awarded with the State Award for Best Literary Artist Debut 2012. His poems have been translated in English, French, Spanish and Russian.

Manos Athanasiadis (Greece) is a composer, pianist and a Jazz Piano and Theory professor at the Philippos Nakas Conservatory. He has worked with the ensemble "Cammer-ton" and with his own Jazz Trio having performed in several festivals and concert halls including the Megaron Athens Concert Hall. He has presented excerpts from Sacred concerts of Duke Ellington in his own orchestrations at the 7th Festival of Sacred Music of Patmos. In 2012 he released his first album "Everybody Swings" with known Jazz standards in his own arrangements. In December 2012 he released his training book "The vocabulary of the Jazz pianist" by the F.Nakas publications.

Katerina Kozadinou (Poland) is a singer and music teacher. She studied musica at Codarts (Rotterdam Conservatory) from where he obtained Bachelor in Music, specializing in jazz. the Bachelor continued her studies at the Technical EVI (Estill Voice International) and she graduated as a Certified Master Teacher. In 2008 she won the competition "Ca Balance" as emerging jazz singer. She has performed in Greece, the Netherlands and Belgium as a band leader and lead vocalist, including in the renown North Sea Jazz Festival, SPS Jazz Festival, Jazz International Liege and Lantaren Venster.

Alexandre Cabrita (Portugal) is a painter and a photographer with a degree in Fine Arts by the University of Fine-Arts in Lisbon and a master in Arts by the Central Saint Martins, London Institute. As a photographer he has worked for Pierre Fabre - René Furterer and Dandi, has joined several collaborations with international art performers and developed commissioned photography projects related to Salinas de Rio Maior and Castelo de Almourol in Portugal.

Suzette Bronkhorst and Ronald Eissens (The Netherlands) instituted the world’s first Hotline for hate on the Internet, created the First Sailing Internet connection (as part of a national anti-racism education project), co-founded the International Network Against Cyber Hate (INACH) and organized food and medicine transports to the besieged city of Sarajevo.

Ronald Eissens has published extensively on the subject of Cyber Hate and is an expert on online Antisemitism, Holocaust denial and counter-speech. He is General Director and co-founder of the International Human Rights NGO Magenta Foundation, based in Amsterdam.

Suzette Bronkhorst worked from an early age as an editor, sound engineer and disk jockey (the first female one in the Netherlands). She is the Director of Magenta Projects and co-founder of Magenta Foundation.

The amount requested will help covering the following expenses: - renting a studio for rehearsals: 200€ - renting a recording studio: 250€ - printing, assembling and sending the booklets: 650€ - renting the equipment for filming: 1000€ - paying the fee of PPL: 110€ Deadline The project will be completed on the 14th of March of 2015, a week before the International Day against Racism 2015. Planning: October - write and translate the text to English November – compose and record the song December – choreograph, create a storyboard of the choreography and take the pictures January - film and edit the dance video February - design and print the booklet March – write and send press-releases 21th March - launch the dance-video from March on – distribute the booklets and follow-up on the project

42 members of the PPL community
support this campaign