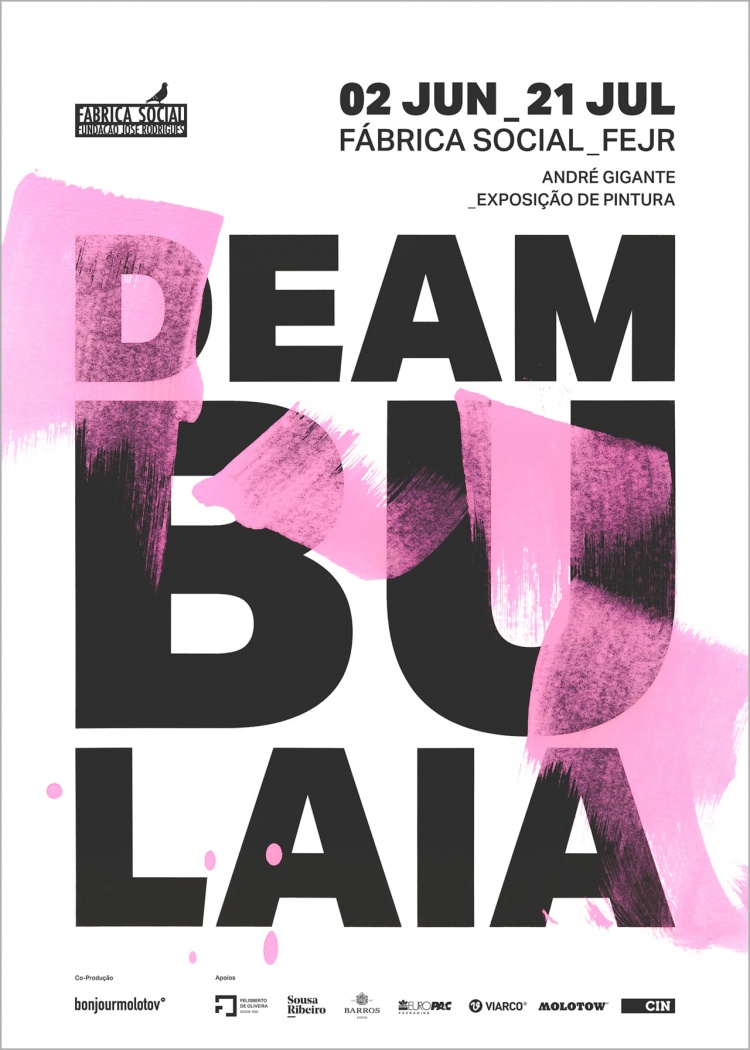 Deambulaia is an open dialogue with one’s imagination, a metamorphosis of sorts, shaped by the uniqueness of our own identity.
What lies beyond stereotypes? Over the shared places where the limits of perception reside? What dimensions can one find, what scales, forms and spaces, time and stories, what feelings and tensions, rhythms and sounds? If our minds are bound in a time when formulas rule over trends and ephemeral shapes, can we truly be free?
The series is an invitation to an individual journey, a space to let yourself go, a rendezvous between the premeditated and the random, halfway between intuition and intellect.

During the entire Deambulaia exhibition dates, the author will host a weekly guided tour of the exhibition, walking the participants through the creative process of the series and the theme/ideas that the artworks embody. The series will aso be exhibited in Lisbon, and although the Palácio das Galveias has shown a special interest in hosting the event, a final date and venue are yet to be confirmed.

“This Road is a place of imperfect textural impulses, full of depth, a challenge to stillness. (...)
In each work a new pulse, a different rhythm. Proposals for new sounds that stimulate new dialogues, new dances. But make no mistake... silence is described here with great mastery. When by contrast the minimal gesture occupies the canvas, we realize that twenty notes can have the same weight as a single one, so to be the only one possible there. Silence also has music.
To seek meaning here is to increase our imaginary world. It is also an act of creation. If it’s worth it, because what mobilizes us is always worth it, then this sound creating gesture may have found a new world here - ours.
Now go, ‘deambulate’, wander around!” 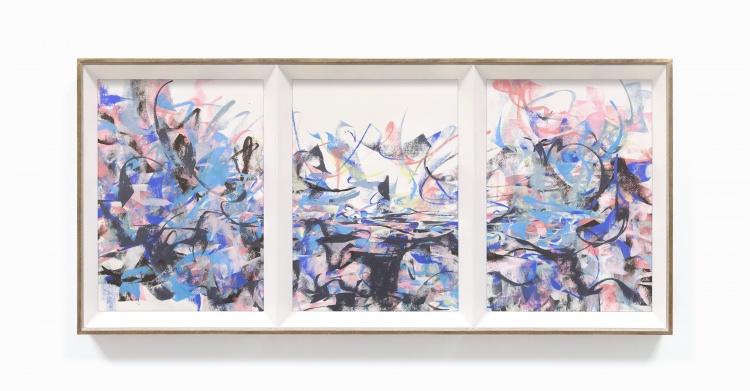 During the exhibition’s first week, André Gigante and Telmo Castro will coordinate a series of workshops, exploring alternative painting techniques with an audio/musical background, at the Fundação Escultor José Rodrigues, intended for students of different ages and educational levels, in and out of the visual arts fields, in a balance between expression and senses.

The workshop intends to contribute to the diversity and quality of the artistic community, promoting the participation of the public in cultural and artistic creation, perceiving experimentation and research as a fundamental basis for positive development and knowledge.

André Gigante was born in Porto in 1980. He studied Arts at Soares dos Reis School of Arts and concluded his degree in Architecture at the Faculty of Architecture of the University of Porto (FAUP) in 2006. André is a collaborator and co-author of several architecture projects at the José Gigante architecture firm since 2006 and has designed projects as an individual author since 2008. In 2009 creates Alvará, a musical intervention group. By the end of 2011, he was the co-founder of bonjourmolotov, a visual arts and multimedia studio, focusing on illustration and painting, graphic design, photography, animation, motion graphics and creative writing, where he currently works.

His works in the fields of photography and painting were exhibited in several countries, such as Portugal, Italy, Turkey, Mexico and Switzerland, in both individual and collective shows, and in venues such as the Triennale di Milano, the Arena del Museo Camberotti in Latina, the Piazza Palazzo di Città in Turim, the Piazzetta dell’Anfiteatro Romano in Aosta, the Festival della Creatività in Florence, the Piazza Sant’Oronzo in Lecce, the Istanbul Design Week, the Museo del Acero in Monterrey, the M.A.X. Museo in Chiasso, the Fundação Escultor José Rodrigues, the Cooperativa Árvore, the Faculty of Architecture of the University of Porto (FAUP), the Escola Superior Artística do Porto, the OLHO Animation Film Festival, the Festival de Cinema in Avanca, the Casa da Cultura in Estarreja, the Fundação Portuguesa das Comunicações, the Espaço Mira, the Hotel and Tourism School of Porto, among others.

Over the years, André has seen his work featured and awarded in several platforms. Examples of that are his publications and exhibitions in the architecture field, both national and international, as well has nominations for the Enor Awards and Habitar Portugal Awards; the workshops developed for the Experimenta Design Biennale 2015, co-produced by ESAD - School of Art and Design, and the 2nd place in the Competition for the design account of the São João National Theatre, in the design field; and the features in Photo Magazine, Author of the Month in Shot! Magazine, the feature in the Good 50x70 - Second Edition publication and the online selection of the Magnum curators for the Magnum Awards 2016, all in the photography field. Also of mention are some of his published written works, as is the case of “O Pavilhão Carlos Ramos”, a piece published by FAUP Editions, on the work of the architect Siza Vieira.

The objective of this campaign is the raise about 25% of the funds needed to produce the Deambulaia exhibition.
The detailed budget listed below already contemplates the discounts given by the companies involved.

The bonjourmolotov studio designed, at zero cost, all the graphic materials for the promotion of the event.
For the production of the exhibition and the workshops, Fundação Escultor José Rodrigues provided the necessary spaces within their foundation.
We also partnered with the companies Felisberto de Oliveira, Papelaria Sousa Ribeiro, Porto Barros, Europac, Viarco, CIN and Molotow, whose non-monetary support is not contemplated on the budget list below.

DATE AND VENUE
The exhibition will be held at Fundação Escultor José Rodrigues from June 2nd to July 21st, 2018.
By request of the venue space, the exhibition preparations and mounting can be started by the end of May.

FRAMES AND WALL MOUNTING
The necessary frames for the exhibition were already produced and the works are ready to be exhibited.
We are waiting for the stainless steel rods and adjustment brackets needed for the wall mounting, that are being produced at the moment.

PRINTED MATERIAL
In order to ensure a proper marketing campaign, all the printed materials are ready to produce and will be delivered until May 15th.