Come and visit the altarpiece of the Igreja da Misericórdia de Tentúgal, one of the jewels of the 16th century national sculpture. Due to its serious state of deterioration, if ...

Come and visit the altarpiece of the Igreja da Misericórdia de Tentúgal, one of the jewels of the 16th century national sculpture. Due to its serious state of deterioration, if we do not help this work, we will lose it and that will be everyone's responsibility. ”

The Church of Misericórdia in Tentúgal, is a classified building (Dec. nº 37728, DG 4 of 05-01-1950). It has in it's interior a 16th Century Altar-Piece which is an emblematic work of the Portuguese Renaissance, carved in Ançã stone by the sculptor of images, the “imagery” Tomé Velho da Lamarosa, a disciple of João de Ruão at the sculptural school of Coimbra.

In October 2018, the storm Leslie violently lashed the Church's façade, causing several spiers to disappear. The eighteenth-century cross and the world globe that topped the gable fell and since they were made of solid stone destroyed the Church's roofs. As a result of the impact the Altarpiece showed several cracks, which  caused it  to start detaching from the back wall threatening the all structure to fall down.

According to the "Patrimony Conservation and Safeguarding" technicians expertise it is imperative to urgently proceed with works to restore and consolidate the support of this stunning and imposing Polychrome altarpiece, carved in Ançã stone. This Alterpiece is an unique work of art which represents several episodes of the Bible, aimed to allow the Scriptures to be known by those who could not read and so preventing its misrepresentation and religious sects to spread .

Misericórdia Church of Tentúgal stands as an emblematic building of the patrimony and architectural structure of the village as well as all Montemor-O-Velho  Municipality, attesting to the religiosity, work and care of this People and their ancestors. The 16th century Altarpiece is a treasure of Portuguese sculpture, being the main reason for the countless visitors that Misericórdia receives every year both national and international. But since the Misericórdia of Tentúgal, is one of the smallest Mesericórdias in the country, it does not have the necessary financial means to carry out a conservation and restoration project for the Altarpiece. If we do not help this masterpiece of Portuguese sculpture not to fall into ruin it will be lost forever and that will be everyone's responsibility. 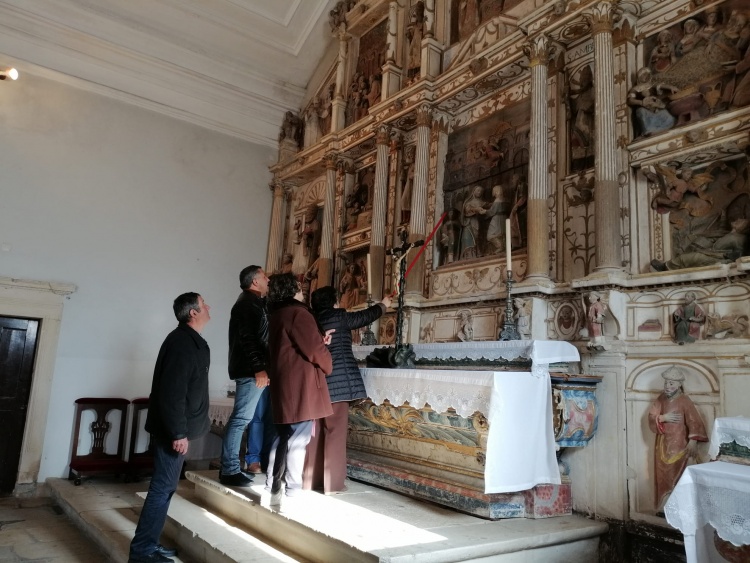 Misericórdia of Tentúgal is part of the rural area of Baixo-Mondego. Its several services provide support and assistance to disadvantaged and needy social groups: SAD (Home Support Service) for  bedridden elderly  persons, or persons  with any kind of disability but who prefer to stay in their home taking care of the kitchen garden or of its animals and to whom Misericórdia services provide food, medication, daily hygiene and image care services; A Day Center,  aimed to the elderly person who is still independent. In this case the person stays during the day at the Center and  returns at night or on weekends  to their  family home.  This group of people turns to Misericórdia for company and to overcome loneliness. The Center provides then lunch and a snack in the afternoon, the day being busy with group activities such as gymnastics, handicrafts, drawing, collages as well as tours organized by Misericórdia. If necessary  medication is also provided; Lar is aimed to boost the bond with family and friends and so it values the relationship with the community. This Misericórdia service  has developed a Senior University  in a partnership with Aposenior  aimed at elderly schooled people and a literacy class for illiterate people who want to learn to read. Misericórdia  has also established protocols with the "Food Bank against hunger" and with POAPMC (Food Operational Program for people in seve need), providing the distribution of food products and monitoring  people in confirmed  economic need  and with POAPMC (Food Operational Program for people in severe need) providing the distribution of food products and monitoring  people in confirmed economic need. Dayly life in Lar and Day Care Center follows the civil and liturgical calendar  keeping alive different traditions: during the Christmas season  Janeiras are sung, during Carnival everybody plays traditional  games, during Lent it is the time to make lanterns for the children to cary in the  Way of the Cross Procession on Easter Solemnities,  June is the time to visit the Holy Queen in Coimbra and also in June it is the time to march celebrating the Popular Saints. During summer  several trips to the beach are organised. Misericórdia also organizes a visit to Fátima and in October on the smile's day  smiling pictures  decorate the rooms. Making the Nativity Scene is the biggest activity with which the year ends. Whenever they want users of Misericórdia services  are free to go out or go for a walk, to the cafe or the supermarket and every month they attend the local fair on the five and nineteen of each month.

All Misericórdias are autonomous and, with the exception of the one in Lisbon, all the work provided by  their Social Bodies it is not paid therefore nobody is entitled to any financial compensation. Misericórdia of Tentúgal is located in the rural area of Baixo Mondego. All its users are beneficiaries of the general Social Security system, receiving very low old-age pensions and therefore the monthly fees charged for the services provided are also very low. We need everyone's solidarity in order to recover our artistic heritage without jeopardizing the sustainability of this Santa Casa da Misericórdia of Tentúgal. 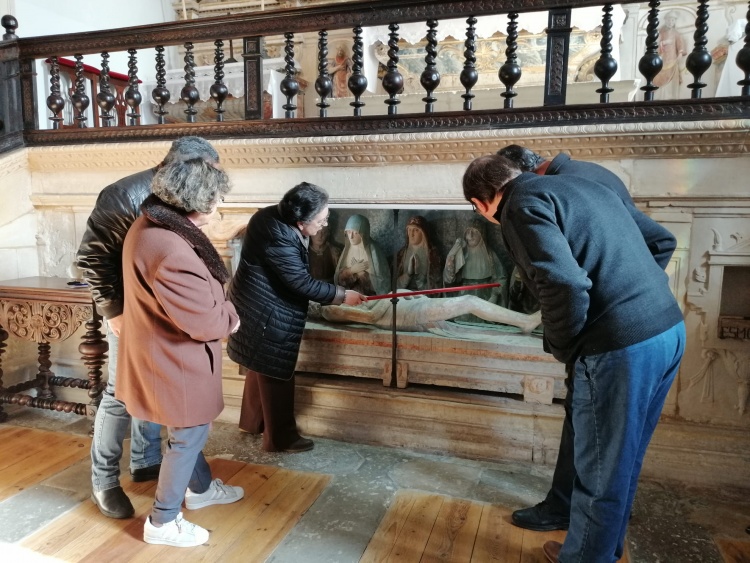 - Donations raised during visits to the Church of Santa Casa da Misericórdia: 8,680 €

34 members of the PPL community
support this campaign