Lead a Portuguese cyclists team, Vitor Gamito and José Rosa to participate in mountain biking and most important competition in the world media, also known by the Tour de France...

Lead a Portuguese cyclists team, Vitor Gamito and José Rosa to participate in mountain biking and most important competition in the world media, also known by the Tour de France biking / MTB. The Absa Cape Epic (15 to March 22, 2015) in Cape Town - South Africa.

Vitor Gamito needs no introduction. Was one of the best portuguese riders in the 90s, won one Tour of Portugal and was olympic athlete - Sydney 2000.  In 2004 he had to leave the high competition due to a health problem. In late 2013 stunned the world when he announced  to attend one more time in the Tour of Portugal, to say goodbye with dignity of the queen of portuguese races. And so he did, and with a tremendous media success!

José Rosa, was also a professional cyclist in the late 80s and 90s. He passed by the best national teams, but it was always a hard worker. Always dispensed with outstanding results to devote helping their leaders to win. Cases of Vitor Gamito and Joaquim Gomes.

After several years away from bikes in recent years returned in force, and is the current national champion in the masters category and won the Cup of Portugal in the same category.

The opportunity to participate in an event of the size and importance of the Absa Cape Epic is a form of appreciation for the good work by José Rosa on behalf of the national cycling and its leaders. 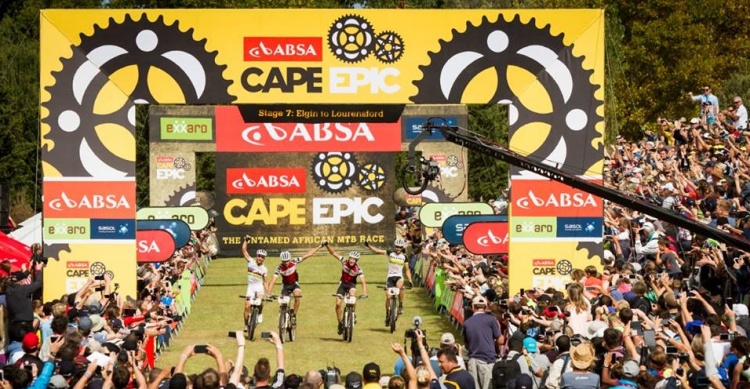 10% of revenue will be directed to the solidarity support to Henrique Venda. A Portuguese motocross rider who suffered a serious accident 4 years ago, a competition in France, and continues with much of the body paralyzed and with many difficulties communicating.

The GoldNutrition also intends to contribute to this cause and doubles the amount raised for the Algarve pilot.

Who is Vitor Gamito

Participated in 11 Tours of Portugal, two Vueltas a España and the 2000 Sydney Olympics.

A win and four seconds place in the Tour of Portugal. More than 30 stages wins and GP.
Over 600.000km traveled.

Who is José Rosa

Currently aged 45, is the National Champion MTB marathons in masters category and won the Cup of Portugal Marathons in the same category.

Was also a professional cyclist in the 90s, being co-Vitor Gamito the team Sicasal / Acral in the years 1994 and 1995.

The total budget for this project is 7938 Euros, however the brand GoldNutrition pledged to sponsor with 1 Euro for every Euro raised by crowdfounding, and 18% of the funds required will be achieved through the sale of equipment officers therefore need garner about 38% of the total budget, ie 3,000 Euros to facilitate this project. These 3,000 Euros are already considered 10% for social cause * + 5% commission to the PPL. The deadline that was established on 5 December 2014. (*) Social Cause: 10% of revenue will be directed towards supporting Henrique Venda. A Portuguese motocross rider who suffered a serious accident 4 years ago, a competition in France, and continues with much of the body paralyzed and with many difficulties communicating. The GoldNutrition also intends to contribute to this cause and doubles the amount raised for the Algarve pilot. All about Henrique Venda here http://bit.ly/ApoioHenriqueVenda Budget Summary: - Registration: € 3,885 - Travel: € 1,700 (flights: 1500 € + shipping bikes: 200 €) - Accommodation: € 1279 (relating 3 prior to the start of the race the following day and the end day, the day of the race we were housed in tents organization) - Food: € 120 (referring to the days prior to the test, in the days of the race have the power organization) - Service in proof: € 404 (+ mechanical massage recovery) - Material wear and contingency reserve: € 450 (tires, chains, ...) - minimum Donation social cause: 285 Euros + 285 Euros donated by GoldNutrition (increases with the amount raised) - Commission of PPL (5%): 150 Euros If the amount raised exceeds the stipulated purpose, this will be used to finance part of the cost of participation in the tests that the team will participate in preparation for the Absa Cape Epic, namely the Andalucia Bike Race (Spain). However, 10% of the total amount raised will revert to the social cause, plus 10% donated by GoldNutrition.

506 members of the PPL community
support this campaign