Cycling from France to Ireland for better smiling - o2o 2015

Ana Mascate will be participating and the funds raised with her participation are destined to finance the dental care of the children sheltered by the Casa de Acolhimento da Mão...

Ana Mascate will be participating and the funds raised with her participation are destined to finance the dental care of the children sheltered by the Casa de Acolhimento da Mão Amiga (Friendly Hand Shelter Home).

In a corporate environment were social participation is nurtured and sports practice encouraged, a group of 30 Genworth’s employees, from different countries, put themselves to the challenge of cycling 500km, during 5 days (between May 29 and June 2, 2015), between Genworth’s Paris and Shannon offices, destined to raise funds for several charities.

This is the third initiative of the event called “Office 2 Office", which started in 2013, when 5 Genworth’s employees from its Irish Office decided to start a cycling adventure between the offices in Shannon, Ireland and London, UK, aiming to raise funds to an Irish charity. The event and the cyclists success was so significantly that in 2014 the number of participants quadrupled and in 2015 will be more than 30 pedaling from Frnace to Ireland.

From Portugal, Ana Mascate will be participating and the funds raised with her participation are destined to finance the the dental care of the children sheltered by the Casa de Acolhimento da Mão Amiga (Friendly Hand Shelter Home), having chosen this institution after considered investigation and knowing the amazing work that the institution carries on in such a positive way.

With the amount raised it will be possible to create a fund destined to provide dental care to all children that are sheltered by the Institution.

The dental care will be provided to the Children with the collaboration of the dental care clinic Faceart, which has volunteered to offer its services for a reduced price. 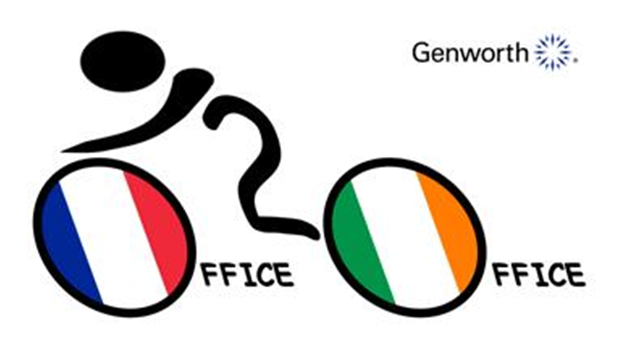 Genworth is an insurance company with head office in the UK, specialized in Lifestyle Protection Insurances and within its social policy promotes and encourages the social activities organized by its employees. Ana Mascate is Genworth’s Legal Counsel in Portugal. She will be part of the cycling team and will participate actively in the project, bonding her passion for cycle with fund raising destined to provide dental care to the children living in the “Casa de Acolhimento da Mão Amiga” (Friendly Hand Shelter Home).

The Casa de Acolhimento da Mão Amiga (Friendly Hand Shelter Home) is a social interest institution created on June 25, 2001 with the purpose of assuring the welfare of children and youngsters in danger, to promote their rights and their full growth and development. It fosters 12 children with ages from 0 to 12 years old, object of measures of temporary sheltering issued by oficial entities accordingly and in compliance with the Law for the Protection and Promotion of the Child.

With its intervention, the “Casa de Acolhimento da Mão Amiga” (Friendly Hand Shelter Home) has been able to give shelter to children, providing for their Basic needs, their welfare and afection, as well as supporting the foundations for a Life Project that allow their growth and the family and social integration. From 2001 until 2014 the Institution has already sheltered 120 children and gave support to 68 Families, allowing the achievement of 110 Life Projects.

Their message is: WE change the children life and build Happy Stories!

The idea is to create a fund in the Institution “Casa de Acolhimento da Mão Amiga” (Friendly Hand Shelter Home) for the dental care of the children that are already sheltered by the institution and also for the children that may be sheltered in the future. At present time, the house shelters the following children who will need treatments:
- 4 Girls: ages 8, 4 and 3;
- 5 Boys: ages 8, 7, 6 , 5 and 4
We have obtained the collaboration of dental care clinic Faceart in order to reduce the treatment costs and maximize the raised amount. The deadline for this project ends in June 10, 2015