Support for 38 former workers at Guludo Beach Lodge, Cabo Delgado, northern Mozambique. This team saw their workplace devastated by Cyclone Kenneth, had to flee their village at...

Support for 38 former workers at Guludo Beach Lodge, Cabo Delgado, northern Mozambique. This team saw their workplace devastated by Cyclone Kenneth, had to flee their village attacked by terrorists and now, COVID-19.

Guludo Beach Lodge was created in 2009 with the to fight extreme poverty and contributing to the conservation of terrestrial and marine habitats in the village of Guludo, in the extreme north of Mozambique. It is a story of a once paradisiacal place, where many lived unforgettable days in contact with nature ... one foot in the sand and the other in the sea.

Nine seaside “bands”, a restaurant, a bar, a diving center, a friendly and welcoming team, chosen from among the inhabitants of the village. Nature offered the materials for construction, food for the table and charm for the soul. A virgin place, with ancestral customs, where we could find what we need and nothing more.

This was not tourism, it was transformation.

This place no longer exists.

At the end of 2017, the passage of Cyclone Kenneth devastated, in a few minutes, the hotel and several villages in the region. The phenomenon of terrorism found reasons to settle there, forcing the team of workers and their families to flee, leaving everything behind. Today, in the face of a devastating pandemic, the hope for a new job is even lower.

We need all possible help to support this group and their families in urgent access to essential goods, seeds, farming tools and means to strengthen their homes in this rainy season. We also want to contribute to the recovery of their jobs by strengthening skills, supporting applications and formalizing local partnerships.

As a former director of Guludo Beach Lodge, I appeal to this cause.

Let's support this team. We can do it and we will make a difference. 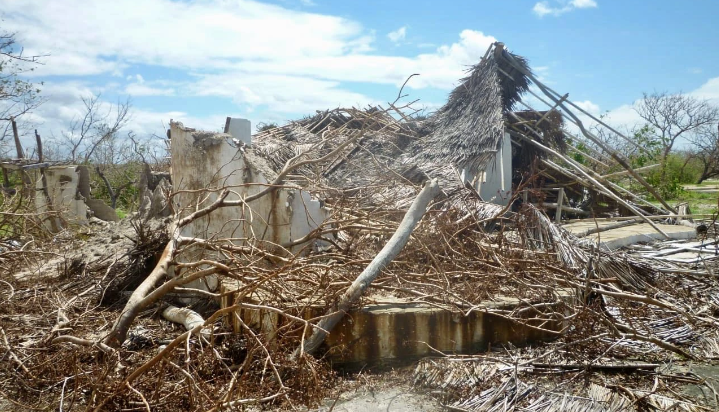 We are a group of six Portuguese and two Mozambicans.

The Portuguese group includes the former director of Guludo Beach Lodge, a designer, a company manager, a manager in the area of social responsibility, a communication professional and a project manager. This is undoubtedly a very diverse team in terms of professional skills and life experiences.

The two Mozambicans are the former managers of the Guludo Beach Lodge whose participation is vital to the success, relevance and implementation of this initiative. They are two of the campaign's beneficiaries who, in addition to launching the initial appeal, are fully available and committed to helping the rest of the group that is living in very difficult conditions.

What unites us is the need to react to a very serious problem that is affecting more than half a million Mozambicans.

Ensure the survival of the 38 former workers of Guludo Beach Lodge and their families, sending to each one € 35 per month during the next 12 months, for the purchase of essential goods, seeds, farming tools and for housing improvements during the rainy season.

The budget for this phase includes associated expenses: international transfers, domain and website creation and communications between Portugal and Mozambique.

Bring all the team members back to a job situation in safe territory, through the reinforcement of skills, support for applications and local partnerships.

The budget for this phase includes the associated expenses: hiring a trainer, renting a room, producing manuals and communications between Portugal and Mozambique.