The chair of Cavalo Azul in the Matobra's course of life

Enable yourself to win the "Cavalo Azul" chair! Receive it through your donation. The donations will be used to pay part of the debt of construction of social equipment (€ 243,0...

Enable yourself to win the "Cavalo Azul" chair! Receive it through your donation. The donations will be used to pay part of the debt of construction of social equipment (€ 243,000.00), home of 30 people with mental disabilities.

The social response of LRE, already depleted in its 12 available places, welcomes people with slight, profound and some very deep and / or even severe disabilities / disabilities. Everyone has a need to reside in a collective space, for reasons of their disabilities, self-sufficiency and personal survival, and for age, illness or family dysfunction, where they were previously inserted. The social response of CAO welcomes 30 young people and adults, with development potential and capacities, some with autonomy for an increasingly independent life.

The construction of the social equipment was possible with funding of € 942,000.00 from POPH and a loan from Montepio to AFSD, totaling € 400,000.00. The equipment Cavalo Azul differs for being familiar, for being small. But it makes it more difficult to achieve the sustainability of social and financial missions, since there are no economies of scale. It is with a renewed effort that the quality and dignity of the true "owners" of this social and humanitarian response - its users - is guaranteed.

Cavalo Azul was chosen to be the beneficiary of a fundraising campaign sponsored by Matobra in celebration of its 51st anniversary.

The sponsor offered to the Cavalo Azul 51 chairs that were delivered to philanthropists, decorated by them and, in the end, auctioned in exchange for donations, on December 3, International Day of the Person with Disabilities. The auction will be preceded by a 15-day exhibition, starting on November 18 and ending on December 3.

The donations will be used to pay part of the debt for the construction of the social equipment Cavalo Azul (€ 243,000.00). Also, there are still many other people who need the assistance of the Blue Horse and, therefore, the results that will be achieved will allow to realize the acquisition of furniture in the enlargement of this house, for another 12 people.

Sérgio Vicente - Doctorate in Business Management, Director of the University of Lisbon, President of the Association
Luís Silva - Degree in Public Private Administration from the Faculty of Law of the University of Coimbra, Funding Manager
Luís Costa - Degree in Social Work from Instituto Superior Bissaya Barreto, Technical Director of the Institution
Matobra - Company that decided to contemplate the "Blue Horse" with the solidarity campaign "The Chairs of the Matobra Life Course" 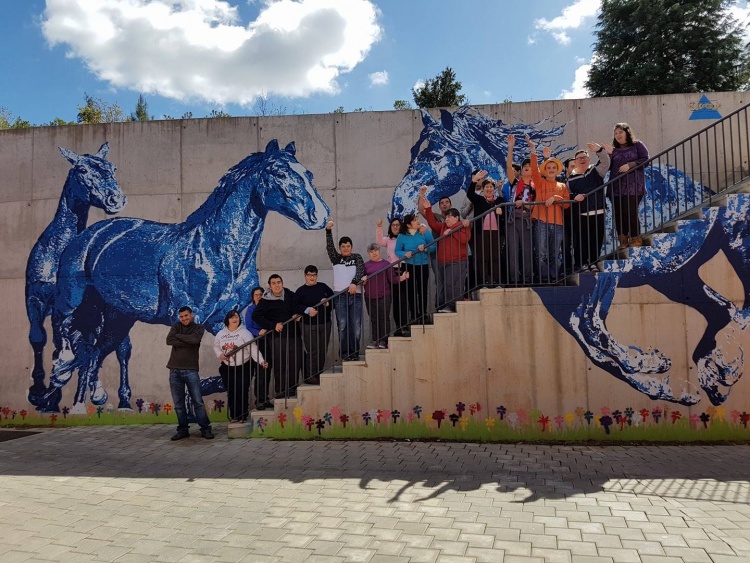