What if public education in Visual Arts in São Tomé and Príncipe could be improved? This was the challenge I set myself when developing a project in a school context and involvi...

What if public education in Visual Arts in São Tomé and Príncipe could be improved? This was the challenge I set myself when developing a project in a school context and involving two very different realities, such as the Portuguese and the Santomean.

I landed in São Tomé and Príncipe for the first time in September 2011, to work as a Visual Arts teacher here at the National Lyceum, in the city of São Tomé.

It has been almost 10 years since I first arrived in the islands and during this decade we never lost sight of each other! At the time, I came here as part of a cooperation project supported by official entities.

From my experience on the ground, I could quickly conclude that there were several challenges ahead. Teachers needed tools and methodologies and a more dignified and fair salary to motivate them to hone their craft. Students were lacking a school with classrooms in better condition and more well-equipped, to receive such a large number of students. However, Visual Arts was where I found more deficiencies, in particular the lack of facilities suitable for artistic practice and materials and supports.

To paint the picture for you, students in the Visual Arts course work in a very small, very hot room, with no space to move around, with broken tables and chairs and no easels. They don't even have a cabinet to safely store materials and works. Not to mention the lack of ability to buy materials with their own means.

This reality struck me and I felt that I had to do what I could for the artistic education in this country. I decided to develop a project in school context bringing together both countries: Portugal and São Tomé and Príncipe. This project is part of the Master in Visual Arts Teaching at the University of Lisbon and was conceived to work simultaneously with two 12th grade classes in the Arts Workshop discipline: one in Lisbon, at Escola Secundária Vergílio Ferreira; the other in São Tomé, at Liceu Nacional.

The idea behind it was that students would make a painting from an audio description recorded by another student. Each student picked a landscape from their country and wrote a text describing it in detail. Then, they recorded the text aloud and that audio record traveled to the other country. Another student, randomly assigned, took that recording and represented the landscape through the painting, without ever seeing it before.

I started the project with students in Lisbon. Then I came to São Tomé, bringing materials and supports for the students in my suitcase. Every day I have to carry these with me for classes. I also brought the works made by the students in Portugal, so that we organize an exhibition with all paintings at the end of this project.

My name is Ana Luísa and I would like you to support this campaign! All funds raised will be used to cover the costs with this project, to buy even more materials for the students in São Tomé and a cabinet to store them. Funds will also contribute to update the arts classroom and to setup the students' exhibitions.

I know the little I do is a tiny part of what remains to be done for public education in arts in this country, but I believe that any contribution can and will make the difference. I will keep you up to date of all news related to the project, the improvements made at schoo and the work done with and by the students.

Oh, and we would love to see you at the opening of the exhibition in São Tomé or in Lisbon, under the subjet “Spoken landscapes: a correspondence between Portugal and São Tomé and Príncipe”!

Thank you very much and zawo non ka bé ! ("See you soon" in forro, one of the national languages) 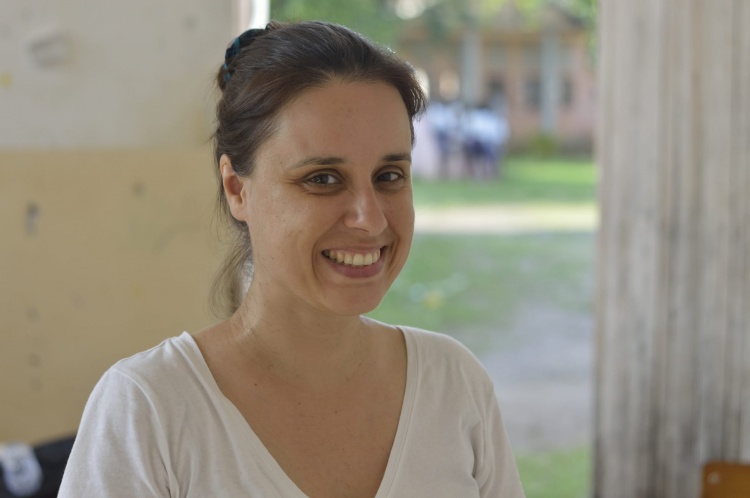 Ana Luísa Pinheiro Antunes. Graduated in Fine Arts from the Superior School of Arts and Design of Caldas da Rainha and currently completing the Master in Visual Arts Teaching at the University of Lisbon.

It was back in September 2011 that I first got in touch with the education system in São Tomé. I was part of a cooperation project aiming to improve the standards in a sustainable way and suiting the country's reality.

I started this project in the first week of March, with the 12th grade Visual Arts students at Escola Secundária de Vergílio Ferreira and, remotely, with the Arts class of Liceu Nacional de São Tomé. Later, in early May, I travelled to São Tomé to continue the project with the students there. Your contribution to this campaign will help support investments made for this project to come to reality, such as:

3% of the amount raised during the campaign will also be used to support África Negra, a traditional music group from São Tomé and Príncipe, whose song Carambola was used as background music throughout the video.