EFEITO BERBERETA Show: Campaign to fund the scenography and costumes of this project with affection.

EFEITO BERBERETA Show: Campaign to fund the scenography and costumes of this project with affection.

Despite this spectacle fighting capital
don't take this the wrong way
But we can't make our art
without, in part,
Ask Santa Claus for help

Oops! It's already January, we debut in February,
but we're still broke.
Santa Claus went on vacation, expelling bacteria
of the immune system and left us without pay.

But also how boring
resort to patriarchy
this great fiction
that sells us conviction
that we don't need the community
to provide continuity
to the project of equality.

and here we are
asking for your help
there is someone to help us!

to make a costume
that do justice
to uterine movement.

Oh and there's also the scenery!
which will be extraordinary
if not resorting to materials
of multinationals
based abroad
which rhymes with...
€€€€€€€€

Basically, what makes the world go round
that's what we're lacking.

read ahead
the synopsis of this mind-blowing show
which is less annoying
because it doesn't rhyme anymore
like what's up.

Effect Berbereta is a theater show, in the form of rhapsody (which rhymes with parody – let's stop, we swear) set to music, spoken and sung.
It is a manifesto that questions the concepts of nuclear family and parenthood as capitalist cells, investigating the identity (political, intellectual, emotional, gender and sexual) inherited through the biological chains that link human beings.
Berberetta Effect is still a rosy world, where love governed by the laws of biology was abolished; where butterfly babies, born out of test tubes, rhyme because there are no more nuclear families, and walking, they dance, because parenthood as a cell of reproduction and consumption has come to an end; it is the cocoon where these little flying beings discover that even without a mother or father they have a navel; and that the initial wound, that permanent scar reminds you that they came from somewhere darker. 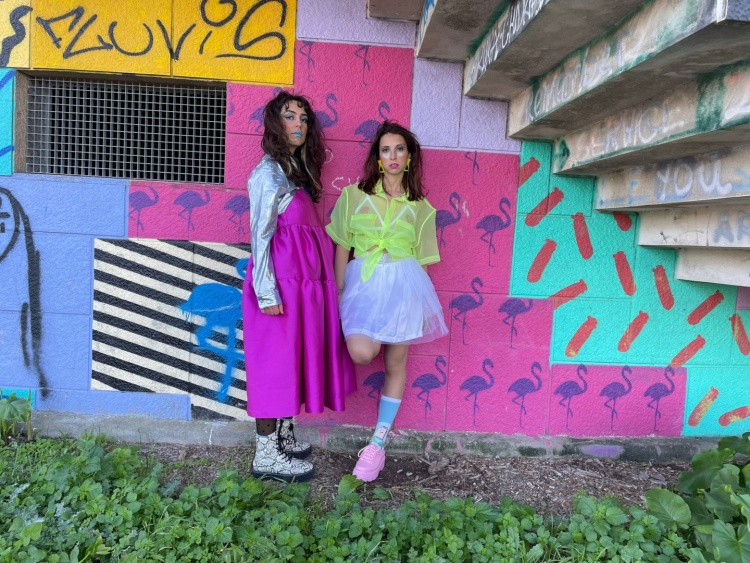 LOBBY TEATRO is a professional theater company founded by Mariana Fonseca and Joana Brito Silva whose fundamental purpose is to promote creations and original texts by emerging artists, contributing to the renewal of the artistic fabric.

​It stands out for its multidisciplinary projects and its willingness to work with different groups, with a concern to actively intervene, through artistic practices, in communities living in vulnerable situations, in places with limited access to culture.

​LOBBY TEATRO assumes itself as a feminist, anti-racist theater company and an ally of the LGBTQIA+ community, aiming to be a safe space for the creation and amplification of multiple voices.

Inês Marques- Porto, 1998. Studied interpreting at ACE and ESTC. She worked as an actress with Companhia Art'Imagem and was assistant director to Flávio Hamilton. He regularly collaborates in artistic social intervention projects with Associação USINA and Plasticena.

Joana Brito Silva- Lisbon, 1994. Graduated in Theater from ESTC, recently completed her Master's in Applied Theater at Goldsmiths University in London, with a scholarship from FC Gulbenkian. She works as a performer and creator, highlighting her work with Teatro Praga, Raquel André, Dyian Zora and Alex Cassal. He is a founding member of Lobby Teatro. He currently collaborates with Festival TODOS.

71 members of the PPL community
support this campaign