I wrote a book, reporting my experiences, in Mozambique, between 2005 and 2011, as a volunteer. I intend to publish it in order to make known realities, experiences and work in...

I wrote a book, reporting my experiences, in Mozambique, between 2005 and 2011, as a volunteer. I intend to publish it in order to make known realities, experiences and work in various regions of Mozambique.

My first goal is to publish a book in which I report the experiences in Mozambique between 2005 and 2011 , as a volunteer , working in the areas of education and teacher training , literacy of women and HIV - AIDS prevention campaigns . This book , which is awaiting publication, is the result of quite remarkable experiences for two months , over 6 years. At the same time , I realize various trips made between Portugal and Mozambique , and within the country , going through difficult roads , finding communities where life is far from our lives in Europe. It was not always an easy experience . There were bittersweet moments that changed my life .

The second goal is to present the work done in a short period of time , but that allows us to leave the seeds to bear fruits . As a volunteer I had several tasks. Going from region to region to do needs assessment , to give support in different areas . Often , there are some obstacles .

The third goal is to be able, with the profits from the book sales (after the first edition), to help a "small school" ( a kind of nursury school) for street children in a troubled neighborhood on the outskirts of Maputo.

I think these reports are important today, when we witness increasingly contrasts between our continent and the other continents, where poverty prevails and is quite difficult to get enough help for all children. I went there during six summer hollidays. 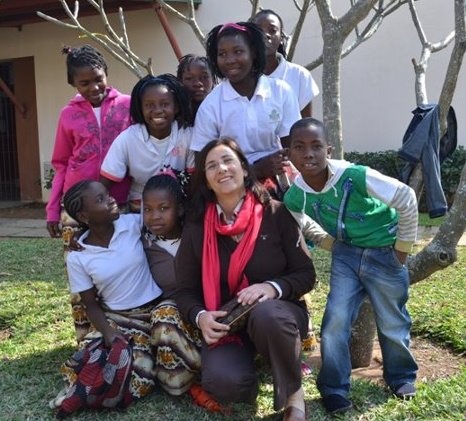 I am Maria José Silva

I was born on September 4th in 1968, in the village of Avanca, Aveiro district, in Portugal, where I always come back because it was here that I took the first steps and the most important in my life, where I went to school and I became a passionate about books.

My volunteer experiences started when I feel that I was prepared to face the reality in this country, and they complete the other experience , be a teacher in Portugal.

I've a big goal, go definitely to this or another country in Africa, where I want to end my days, dedicated to others and to the great experiences of life they provide me .

Writing was not in my horizons, but I did not refuse the challenge that launched me whenever I talked and talked about my experiences and job, in schools or conferences.

For the printing of the first edition of the book , the publishers asked me 1700 Euros.
Each book will costs about 15 Euros ( sale to the public , estimate sent by publishers ).
The goal that I intend to reach is the publication of the book "Whith Mozambique in the Heart ", at a time when I do not have this money and publishers have already expressed several times a desire to publish my experiences . We are at a time when publishers do not publish unknown authors books. We have to pay the publication, so I ask support to realize the project.
If the funds exceed this value, they will be immediately channeled into support for a " small school " for street children, in one of the missions of the Salesians in Mozambique, which we help with some personal sacrifice.
They can also be channeled to support the distribution of a free meal to students of vocational schools in Tete or Inharrime ( Inhambane ), two of the poorest regions where we have two support missions .
To 1700 Euros added 80 Euros + VAT commission = 104.55 Euros.