Participation in the Sailing World Championship 2015

The sailing team Miguel Santos and Manuel Pimenta, 420 class junior National Champions and Bronze Medals of Juniors (male), was qualified to represent Portugal in the 420 class ...

The sailing team Miguel Santos and Manuel Pimenta, 420 class junior National Champions and Bronze Medals of Juniors (male), was qualified to represent Portugal in the 420 class World Championship and 420 Junior European Championship. The team needs financial support in order to participate at the World Championships happening from 17 to 25 July 2015 in Karatsu, Japan. After so many hours at sea we can’t remain "on shore"!

We are Miguel Santos and Manuel Pimenta, athletes of 420 class, training since September 2014 in the Oporto Atlantic Sailing Club. After so many hours at sea we can’t remain "on shore"!

Our first season was fantastic! We are 420 class junior National Champions and Bronze Medals of Juniors (male). We were qualified to represent Portugal in the 420 class World Championship and 420 Junior European Championship. 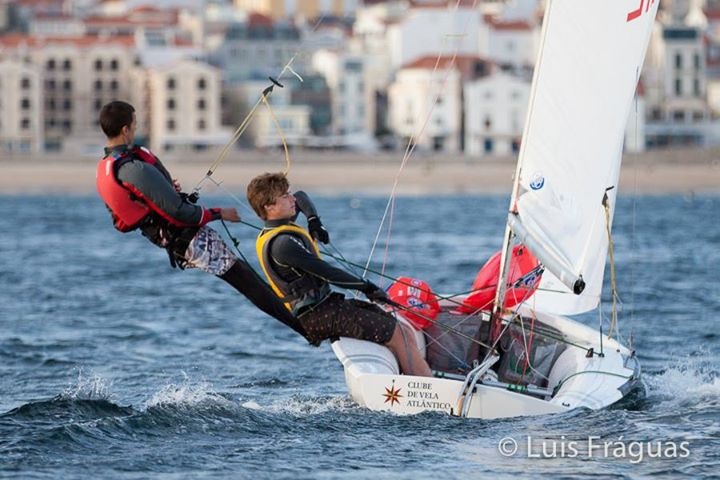 To represent Portugal in international championships, all expenses are borne by the athletes, or in our case – two young people aged 15 and 16 years old - for our families. Neither the Portuguese Sailing Federation nor any other government entity fund.

This year, participation costs at the World Championships are especially high because it is so far away - in Karatsu, Japan. The total budget for the trip is around 7,000 euros per team and must be fully supported by our families.

The idea of using crowdfunding came up in a conversation among friends as a way of getting, in a transparent manner, the funding that could allow us to participate in the World Championship happening from 17 to 25 July 2015 in Karatsu, Japan.

The registration and payment dates are near and we need financial support to enable us to handle with all the expenses.

We welcome and thank all the help.

Manuel Pimenta: He lives in Porto, he is 16 years old and started sailing when he was 11. He devotes his weekends to sailing and has managed to combine the sport with the school where he gets very good results and still makes time for friends and for his other passion: music.

The crowdfunding campaign is active for 40 days.
The budget is to participate in the 420 class World Championship in Karatsu, Japan, leaving on 11th July and returning on 26th July 2015, and includes: Registration fee, Transportation costs (Round trip airplane fare Porto / Fukuoka and Round trip train fare Fukuoka-Karatsu); Accommodation and food (15 days); Boat rental without sails with insurance included; Sails shipping costs; Coach. Total 7 000€.
Of this amount we need to raise 2.500 €