Project that made writing its greatest strength. The Solidary Ebook brought together more than 60 people with a well-defined purpose: to transform words into food.

Project that made writing its greatest strength. The Solidary Ebook brought together more than 60 people with a well-defined purpose: to transform words into food.

The Solidarity Ebook is an idea that brings together more than 100 texts from different authors, compiled in a digital book in PDF version, which is delivered by email to anyone who donates more than € 5 in this fundraising. The idea came up in March 2020, in full confinement, by Tiago Magalhães.

The last few months have been challenging, as the mission of gathering strangers, texts, illustrations, ideas and work, has been on the agenda for a long time. All for a necessary and solidary cause: the money will be invested in food and delivered to another project in the North of the country (Porta Solidária), which daily feeds hundreds of people.

All steps can be known on our social networks, but also on the official website of this project - https://www.projetoebooksolidario.com

Support our mission, allow words to become positive actions, food goods and a precious reinforcement for so many people, who now need them.

Your encouragement is important and gives strength to this project. In addition, it strengthens this idea that we have presented since the beginning of the creation of the project: writing can change lives, Portuguese culture helps people.

We count on you, support us!

Together we will be able to show that too little is done - again! 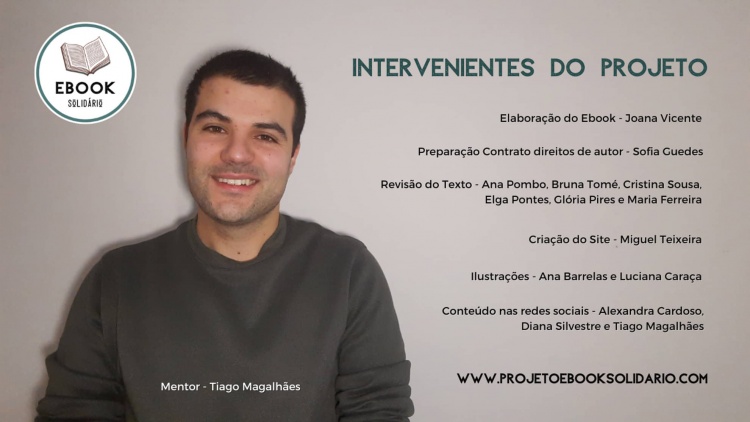 Tiago Magalhães is the author of the brand called Escrita Instantânea Pudim Flan and had the idea of bringing together virtually several people in order to be able to finalize a digital book that could expose the weaknesses, feelings and thoughts of these same people, during this pandemic.

Over time a team was created (whose names appear in the image), which helped to prepare, edit and complete a series of questions (bureaucratic and digital).

The main objective has always been to transform the Solidarity Ebook into a 2 in 1: surprise the authors and give them wings for their imagination, in addition to the fact that in the end we have an article that could be given to anyone who donates more than "X money".

This was the way found to unite people in a common cause, for a practical, essential reason that will change the course of many Portuguese.

A part of the amount will be used to pay the costs inherent to the creation of the website "Projeto Ebook Solidário" (payment of accommodation, domain), that is, if the final value achieved exceeds the target of 1000 euros.

We will also invest 30 euros (if the amount exceeds 500 euros as it progresses over time) in the promotion of the project on the Facebook page, with the promotion of a post on social networks.

All the remaining amount will be delivered to the Porta Solidária project, but beware: it will be converted into the purchase of food and essential goods, to pay bills or other needs. In this way, we will present all the steps in a transparent way, so that there is no doubt that people were really helped.

The idea is to collect the desired amount before the end of the year, in order to meet the needs of many families, in a time of celebration, unity and recollection.

All movements and actions will be shared on social networks and on the official website of the project - https://www.projetoebooksolidario.com

33 members of the PPL community
support this campaign