The ORION - Scientific Society needs urgent maintenance works of the building, where it operates its headquarters since 2005 in Gualtar - Braga.

The ORION - Scientific Society needs urgent maintenance works of the building, where it operates its headquarters since 2005 in Gualtar - Braga.

Prior to being a space for the dissemination of science, the building was abandoned eight years and was recovered by the hands of our associates in 2005 10,000 euros of funding from donations and own shares of associates has been invested.

Right now, almost 10 years later, the building needs urgent works because it has serious leaks that jeopardize the important stored inside the estate.

This space is very important for the community because the ORION promotes throughout the year, workshops, courses, lectures and planetarium shows. In addition, we make dozens of activities with students ranging from elementary to secondary school.

Keep this space in full working order is vital to the promotion of science in the county and Braga.

In fact, we are the only entity in the district of Braga leading astronomy and magic of the universe to schools. 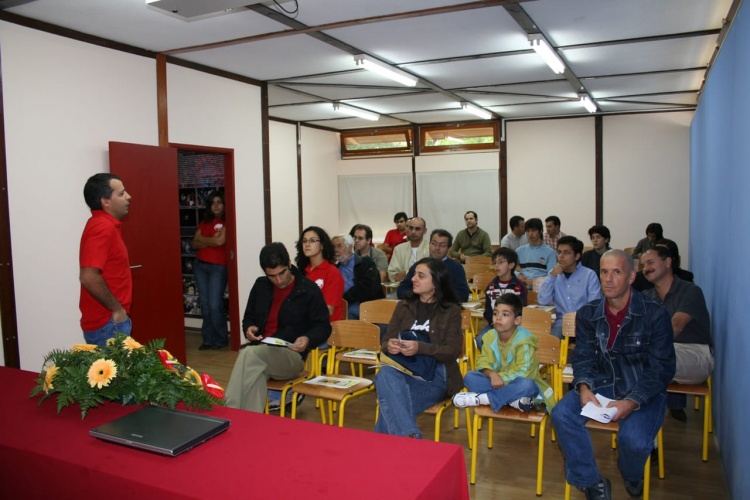 The ORION - Minho Scientific Astronomical Society founded in 2005, resulted from the intent to publicize astronomy and sciences associated with it. In their statutes the ORION aims to create a science center in the city of Braga. Currently, ORION is headquartered at Rua Maria Delfina Gomes 4, in the parish of Gualtar - Braga.

Has a robotic astronomical observatory devoted exclusively to scientific research and dissemination, several telescopes and a mobile inflatable planetarium 7 feet in diameter, and several telescopes. The ORION is a non-profit association which currently has 285 members. Currently also has partnerships with 12 schools EB23, 10 secondary schools (Minho) and two universities (Porto and Minho). Also develops science projects with 8 municipalities of the Minho and Tras-os-Montes region and various national institutions of which we highlight the National Agency for Scientific and Technological Culture.

Our support comes mainly from membership fees and sponsorship.

In addition to these activities, the ORION streamlines lectures, conferences and other actions to inform the public in general. We have a very particular role in supporting educational institutions promoting these sites, educational activities, sky observation sessions, mobile planetarium sessions and courses for teachers and students. From 2005 to 2013, ORION 485 developed planetarium sessions at schools across the country, taught 28 courses in Astronomy and made 518 public observing sessions with telescopes.

Through the "Science-in the Summer" program encouraged more than 840 public meetings to disseminate summer in various parts of Portugal, in the areas of biology, geology and astronomy.

Also promoted several lectures on their premises, with many national and international renowned scientists, an activity entitled "Dinner with a Scientist".

In its component of "research", ORION is dedicated to two main areas: the stellar Spectroscopy and detection of Exoplanets.

Projects often have partnerships with national and international institutions of higher education.

All these projects are based on the astronomical observatory Gualtar in Braga, which is one of the few operational robotic observatories in Portugal.

What we want is to restore the facades (now Wood) placing a suitable insulation (capoto system) that prevents the ingress of moisture to the inside and rot them. This work piece will further improve the thermal performance of the space preventing, for example, that activities are carried out within the periods of cold and high heat. For this work we require about 6 quotes from specialist companies, the cheapest being 7,500 euros: Preparation and demolitions: 1000 Euros Placing foam insulation and capoto: 4500 Euros Paintings and complementary arrangements: 2000 Euros According to the experts consulted this intervention will allow good health conditions of the building for at least 15 to 20 years. Count the work in two months.

19 members of the PPL community
support this campaign