Mandy was wrongly accused of killing a child. A portuguese animals right defense organization named ANIMAL took the case to court. It took them 8 months but they proved his innocence.

During the trials and he was kept in a kennel with no access to medical treatment, walks or any other basic conditions.

After ANIMAL won the case in the court they brought Mandy over to me (I was the dog trainer they asked me to train and evaluate his behaviour). I lived with him in my house for almost 2 months where I trained and mainly evaluated his behaviour and helped him adapt and learn new behaviours.I am a force free trainer so I did this with no use of coercion or aversive techniques.

He did not ever showed any signs of overt anxiety, nor signs of showing aggressive behaviours. He was then sent back to ANIMAL who know takes care of him till the rest of his days, where he lives freely and with a proper smile, so characteristic of him.

Due to past negligence he has some health issues, and needs constant vet care. He has been to the vets and has had some exams and medication to keep him as healthy as possible. Nowadays he is ok, but ANIMAL was left with a bill of 2000€ to pay and needs to settle this debt.

I want to help so I am agreeing to jump off a bridge if the amount of 2000€ is raised till the end of July.

Will you help me jump off a bridge and pay Mandys bills? 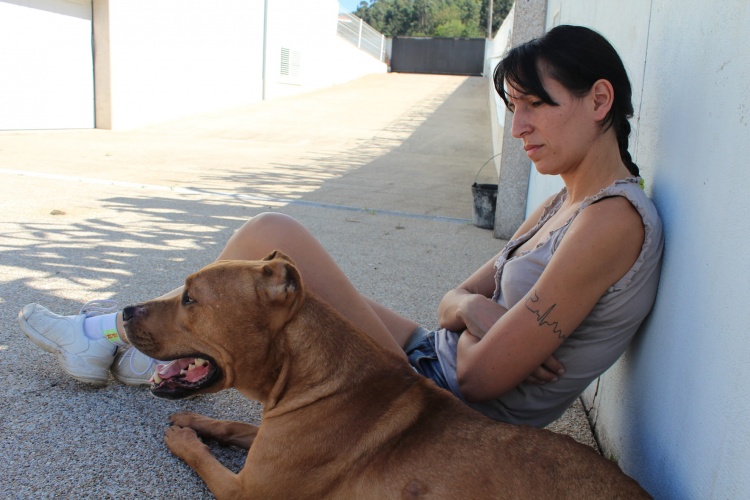 My name is Claudia Estanislau I am a dog trainer in Portugal for the school Its All About Dogs - IAAD and I was the trainer responsible for training and evaluation Mandy's behaviour (before he was known as Zico), in this very media popular case that happened 2 years ago. I met Mandy and lived with him upclose and helped him train using uniquely force free methods and no coercion whatsoever, and sucessfully helped him adapt to his new life and reality.

The amount being request will go entirely to the association ANIMAL to pay for Mandy's veterinary bills since his fragile health demanded some attention in his transition from his former owners to the new home with ANIMAL.

To see the video about Mandy.

The deadline is 31st of July