PORTUGAL - the spirit of Camões - national pride - inspiration for everyone

PORTUGAL, the spirit of Camões, GIFT for Mosteiro dos Jerónimos' visitors, in Belém, Portugal, national pride, inspiration for everyone

PORTUGAL, the spirit of Camões, GIFT for Mosteiro dos Jerónimos' visitors, in Belém, Portugal, national pride, inspiration for everyone

Summer time in Portugal! Time to celebrate Portugal, the Portuguese and portugality i.e. being Portuguese. We start with the Day of Portugal, Camões and Portuguese Communities on June 10, followed by the arrais or street parties, associated with the three people's saints but which are basically an ancient tradition to celebrate the simple, yet best things in life, such as family, friends, fun and food. Until the end of August, there's always a festa going on in some village, town or city all over Portugal. Thousands of the almost five million Portuguese living abroad come back home at this time of the year as they don't want to miss these festivities. The right time also to ask you, Portuguese living in or outside Portugal, Lusophone citizens and friends of Portugal all over the world, to join me in this big, unprecedented campaign to let everyone know and be inspired by the universal and timeless message of Luís de Camões (1924-1580), the author of the long epic poem Os Lusíadas, meaning The Portuguese, which places Portuguese literature among the world´s greatest. But for most of the World, even the Lusophone world, Camões' beautiful, wise and inspirational words remain largely unknown. In the spirit of this new collaborative economy, I’m asking also companies, embassies and international organizations to help me place 20.000 copies (Portuguese/ English) of  PORTUGAL/o espírito de Camões, a 4-page/A 4 format cultural bulletin, to be given away to visitors of Mosteiro dos Jerónimos, in Belém, Lisbon, our most emblematic and  visited national monument, symbol of Portuguese History. As you walk in the Church, you see the tombs of Luís de Camões and Vasco da Gama. Thank you. 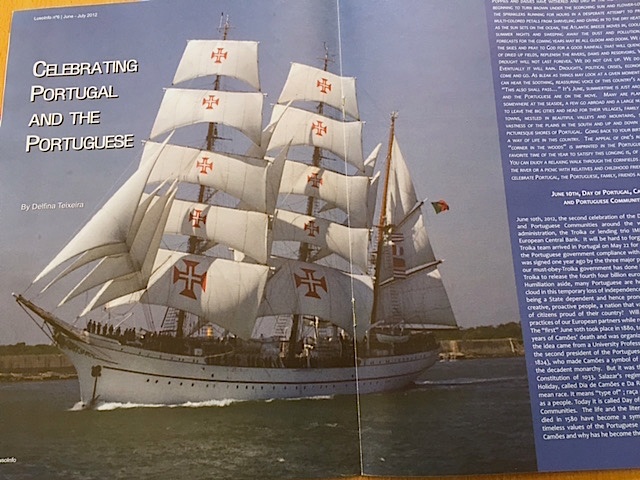 Delfina teaches Portuguese and English in Cascais, Portugal, and is the author and editor of: A Practical Guide to Colloquial Portuguese, vol 1, and 2, co-financed by C. Gulbenkian’s Foundation, the World Bank and Portugal's Ministry of Culture. Born in Viseu, Portugal, she is a graduate from the University of Lisbon, Languages and Humanities, and has a long and vast international experience. Delfina is part of the pre-Erasmus European generation, when European University students started travelling and working all over Western Europe. An enthusiast of the new trend, in the early seventies she got a summer job in then the Federal Republic of Germany and a couple of years later worked in London, UK. Shortly after receiving her UL diploma, she married an American and following a brief four-month stay in Mozambique, she crossed the Atlantic and was on her way to a totally new life in the USA, where her four children, Phillip, Sara, Carlos and Amy were born. For the past two decades she has been writing about Portuguese culture for the international community in the Cascais-Lisbon area. In 2013, she launched the project cultura-para-todos, aiming to disseminate essential and interesting aspects of Portuguese history/culture to a broadened Portuguese, Lusophone and international public, by publishing and distribuiting easy-to-read 4-page publications. In the last three years, NORGE, Bacalhau da Noruega, has sponsored three boletins culturais, 255.000 copies: Portugal-Noruega/Uma relação longa e saudável entre o norte e o sul da Europa (a verdadeira história do bacalhau), and Portugal Vintage/Amor e Política  1960-1980  Tempos de Mudança, distributed FREE in most public universities and a  few shopping centers in continental Portugal. Including 5.000 copies of PORTUGAL / o espírito de Camões, which were mostly made available for Mosteiro dos Jerónimos' visitors as take-one-gift. To know the history and culture of your own country is to have a chance to appreciate it. You can't love what you don't know. It breeds national pride which in turn generates enthusiasm and that yes-we-can feeling.  To know a little about other peoples' cultures is the first, sure step to the Humanity we all aspire to. 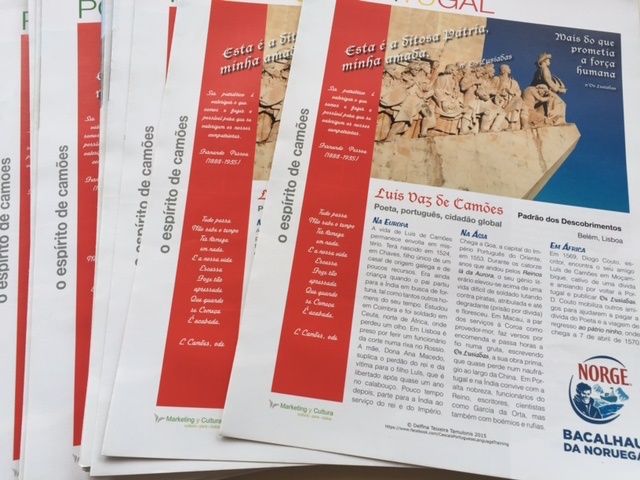