We are Alves Baby and we want to share a "Bonito Serviço" (Beautiful Service) with you.

We are Alves Baby and we want to share a "Bonito Serviço" (Beautiful Service) with you.

Bonito Serviço is the name of our new album, that we've been working on in recent years, after releasing the EP Rissol Aquecido , almost a decade ago.

These new ten songs were made for shaking your head, making you think, dance and, of course, "shoegazing". The first single - Sarrafo - is already circulating around, on digital channels, and the second single - Granada de Água Benta - will soon be released, while this campaign is taking place.

And we launch this crowdfunding campaign because we want Bonito Serviço to reach as many people as possible. And, in particular, those who support new and independent music. Only this way we will be able to make the release of this CD a reality. Plus, we will also have t-shirts and some unique and autographed pieces, among other surprises.

And in practice, this turns out to be a PRE-PURCHASE of the disc, as each person who collaborates in our crowdfunding campaign is ensuring that they receive the disc. It is therefore not a mere fundraising request. And, of course, it should be noted that if the intended amount is not raised within the established deadline, the platform returns the value to the supporters, so it is a secure financing, without any loss for the supporters. If we reach the goal, you will receive your discs. If we don't reach it, you will get your money back.

So that's why we are counting on you! On the right side of this page you can see the different ways available to support us. They all have different rewards! Be sure to check them out! 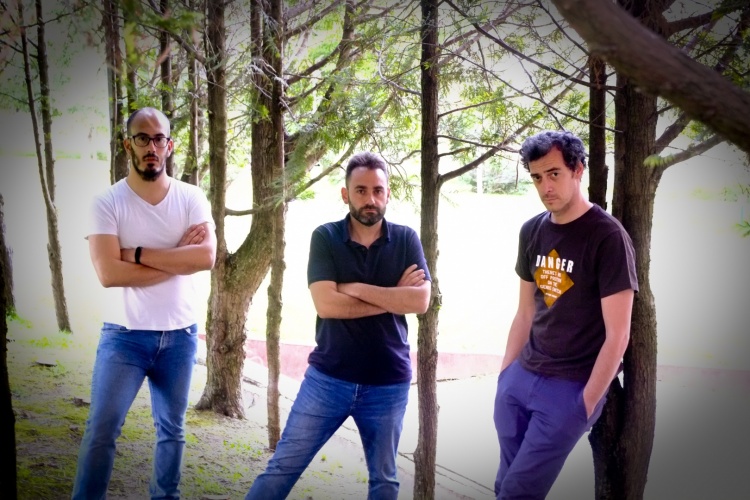 In each song, a journey. On each chord, a ticket to a new soundscape. With influences too big to mention, Alves Baby creates songs in instrumental rock, with influences from alternative rock, indie rock, ambient music, space rock, neopsychedelia, dream pop, shoegazing, chillwave or whatever you want to be pointed out to them. In fact, the band didn't waste a minute thinking about it, except for the minute they lost writing this biography.

It is not on belonging to a musical genre that the collective focuses. Instead, it is in the narratives and musical plots of the songs, in the environmental journeys and in the explosions of sound, that André Sousa , on guitar; Bruno Gonçalves , on bass; and Hugo Pinto , on drums; focus. All of them come from the city of Lisbon (so full of sound narratives, itself), and are well experienced in a vast number of some other musical projects over the last 20 years. Alves Baby released the EP Rissol Aquecido in 2012. Since then, several themes have been worked on and 2021 will be the year of the release of new music for this band.

In a single sentence, Alves Baby is more of a sound sensory experience than a set of chords to please lazy ears.

The deadline for launching and shipping the CD is December 20th .